The Humble Beginnings of David Cronenberg

The following is an entry to the Director's Chair blogathon being hosted by Matte Havoc.

I doubt there's an orifice or body secretion that David Cronenberg doesn't like. Add to that some weird fetishes and his unwavering view on mankind's clinical obsession between sex and science and one arrives at a truly strange yet brilliant body of work. His best films deal with body infestation ("Shivers" and "The Fly") or the idea of twisted connections of obsession and technological mutation ("Videodrome and "existenz"). Al of these ideas are present in Cronenberg's debut film, "Stereo" (1969), and follow up "Crimes of the Future" (1970).

Ok, full disclosure here- both of these early efforts are not very good films. Yet there is some merit in the ideas and thoughts being explored. Like all great filmmakers, there are themes and predilections that will be analyzed and evolved throughout the remainder of his career. While "Stereo" and "Crimes of the Future" suffer from true student film shortcomings, they serve as fascinating footnotes for a filmmaker searching for an identity.

"Stereo" and "Crimes of the Future" deal with similar themes. Both were filmed around the University of Toronto in which Cronenberg attended during the 1960's. While "Stereo" is black and white, "Crimes of the Future" is his first full length color film. Neither of the films, which details the various wanderings of a quizzical scientist, used on location sound editing, forcing them to have a full narration track added in post-production which lends a very detached and monotone feel to the works. Imagine listening to a psychologist read his graduate studies paper aloud and one gets the idea of Cronenberg's desire to lull the viewer with phrases such as "transmorphic inebriation". In essence, "Crimes of the Future", which is the more watchable of the two films, takes a larger financial backing and explores the themes of "Stereo". Starring Ronald Mlodzik as a black coated doctor wandering around the post-modern architecture of the college, he has created the "House of Skin", an institute that treats men inflicted with a disease caused by the use of cosmetics in the future. After his one and only patient dies (through an excruciatingly painful act of a foam liquid being secreted from his eyes, ears and mouth), the doctor wanders from institute to institute coming into contact with other men suffering from various afflictions. Women have all but been annihilated from the very same cosmetic apocalypse, yet there are mutations that crop up in his wanderings such as a male patient who is said to grow female organs before they fall of and re-grow later. Yes, "Crimes of the Future" plays out just as weird as all this sounds. There are some scenes of the doctor playing with other men's feet in some sort of telepathic showcase and a group of men hiding a little girl, whose ominous face and blank stare the film ends on. As a cohesive whole, "Crimes of the Future" fails pretty miserably. 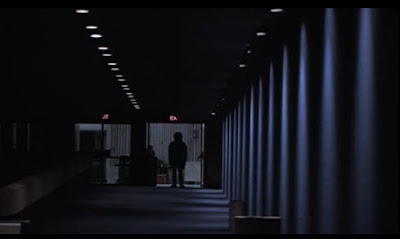 Medical and philosophical ramblings aside, there are some things "Crimes of the Future" does well. Besides looking terrific, Cronenberg's use of light and shadow eclipse some of his later work which preferred to show the violence in full display. His fascination with one's body turning on itself is also a recurring theme as the previously mentioned secretion of fluids signals the death of several patients. It's also not hard to identify his genre-pushing methods of having the doctor (Mlodzik) be mildly attracted to the fluids, eventually tasting them himself. With "Crash" on the way twenty five years later, its obvious Cronenberg wanted to disgust and fascinate in perverse ways early on. Also, the very title itself would be the "aka" title to his 1997 film "existenz"... still one of my very favorite Cronenberg films and the most trenchant examination of virtual reality ever presented on film. Lastly, Cronenberg's now famous image of an exploding head in "Scanners" have their humble beginnings in both "Stereo" and "Crimes of the Future" with their main characters constantly alluding to the telepathic powers inherent in them. In "Crimes of the Future" especially, there are several scenes of the doctor placing a bare foot to his forehead, trying to manipulate the mind of his patient. The budget wasn't there for an exploding head, but one can sure bet Cronenberg would have figured out a way to include this if he could. 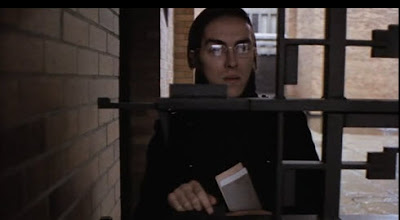 But its the simple traits of "Crimes of the Future" that are the most amazing. Clearly ahead of his time with content, Cronenberg's soundtrack is a truly unnerving experience, full of disconcerting static noises, birds chirping and mechanical droning sounds that add an otherwordly feel to the futuristic pinnings of his film. Also, technically speaking "Crimes of the Future" is a polished film, full of magisterial tracking shots down hallway corridors and fish eye lenses shots that distort the narrative in that oh so good 60's way. Even if I doubt I'll ever watch these two films again, I feel a bit more schooled in the Cronenberg method of cinema... a career that revels in the excess of the nightmarish and wades through the ugly waters of body secretions like no other.
Posted by Joe Baker