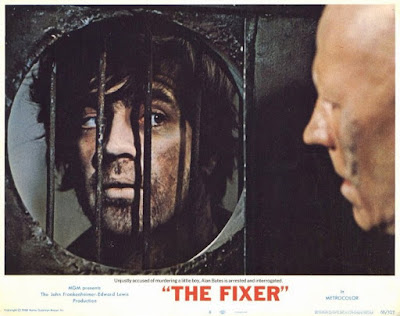 There's no doubt director John Frankenheimer loved to expose the vagaries of pain and suffering. One of the most cringe-inducing sequences of his long career occurred in his sequel to "The French Connection" in 1975, where he spent 15 minutes in a locked room with detective Popeye Doyle (Gene Hackman) who 'spazzed' and kicked through a nasty heroin habit withdrawal. Though it wasn't even remotely central to the rest of the story, it provided Doyle with some pent up aggression towards the criminals he pursued, as well as creating a guttural feel to the already grimy police procedural. Imagine that sequence stretched out to over 90 minutes and one gets the sense of persecution and savagery inflicted upon Yakov (Alan Bates) in Frankenheimer's very hard to find 1968 film "The Fixer". 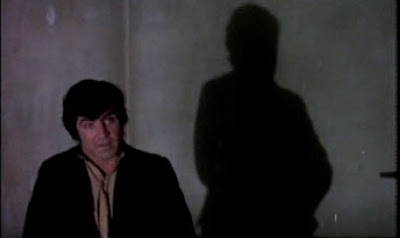 In turn of the century Russia, Alan Bates stars as Yakov, Jewish handyman who gives little regard to his faith, simply trying to earn a living while the Czarist government around him is corralling Jews into ghettos. While walking home one winter night, he rescues a drunk who has fallen into the snow. This man is of high regard in the community and with Yakov's non-Jewish features, he takes him in and offers him a job. It's not long before the jealous workers he supervises concoct a tale of rape and child murder, bringing Yakov's Jewish heritage to light. Yakov serves years in jail, refusing to confess to any crime and becoming the whipping boy for a turnstile of Russian jailers and tunnel-visioned lawyers (the main persecutor being a young Ian Holm). Reminiscent of Joan of Ark (without the burning at the stake part), Frankenheimer elicits a suffocating atmosphere as the walls slowly close in on Yakov over the years and he turns into a beaten, demented and martyred figure of Jewish hope. It's to the credit of lead actor Bates that the film doesn't devolve into something unwatchable and punishing. It is both those things, yet Bates enriches the character with glimmers of humanity and a wry sense of humor that pushes the viewer to hope for the best. In addition, some of the film's best moments come between Bates and appointed defense lawyer Bibikov, played to perfection by Dirk Bogarde. The men discuss philosophy, innocence and the various facets of religious identity. Based on a script by Dalton Trumbo, the allusions to his blacklisted life are streaked throughout the dialogue without becoming overpowering and Frankenheimer does a thorough job of opening up the sometimes stage-bound film in visually exciting ways, such as the moment when Yakov envisions the walls of his cell closing around him. 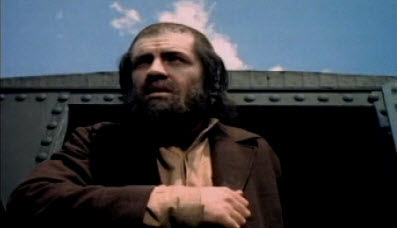 Lost on home video release and rarely shown on television, "The Fixer" was one of the few John Frankenheimer films I'd been unable to see. It's certainly not an easy watch, but an important footnote to a stream of 60's hits that feels tonally out of place with the rest of his challenging and genre-induced work including "The Manchurian Candidate", "The Train", "Seconds" and "Gran Prix", followed by easier tales of small town life and edgy criminal shenanigans such as "The Gypsy Moths" and "I Walk the Line". In all regards, "The Fixer" is a very serious religious and political work that deserved more than the throwaway actor nomination for Alan Bates that year, if for nothing more than its unrelenting gaze on a period of history often overlooked.
Posted by Joe Baker