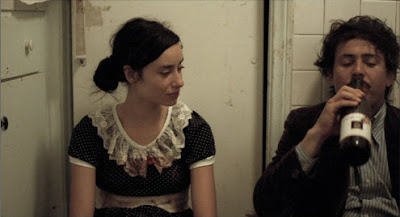 Filmmaker Azazel Jacobs (son of pioneer avant garde filmmaker Ken Jacobs) only has two films under his belt, yet his unique way of dealing with whimsical romanticism and mid life crisis are achingly real. His debut film, "The GoodTimes Kid", completed in 2005 and given a cozy (i.e. very limited) release in 2006, succeeds in spite of its art-house pretensions... which is to say it's full of unbroken long takes and a distinctively muted emotionalism that lingers in the mind far longer than expected.

Opening with a case of mistaken identity, Rodolfo Cano (Gerardo Naranjo) receives a letter stating his application to the army has been accepted. He shows up to the recruiting office and observes the other Cano (played by Jacobs himself) before following him home. Curious as to this other Rodolfo's life, he knocks on the door and, mid raging fury at her boyfriend's passive dismissal of her, meets the girlfriend, Diaz. Played with deceptive sexiness and charm by Sara Diaz, she's a gangly, magnetic screen presence highly reminiscent of a Latina Olive Oil (which has to be some sort of inspiration). After settling down and a messy bout of refrigerator punching, Diaz and the new Rodolfo strike up an almost non-verbal relationship that lasts through the night and into the next day.

Jacobs paints his portrait of this floating trio with a stunning sense of connectedness. The influence of Cassavetes is tactile. At once playful via its long takes and body language comedy, "The GoodTimesKid" veers into honest realism on a dime. When the two Rodolfo's eventually meet, the battle for the heart of Diaz is not won by fists (although there is a hilarious scuffle that begins and ends abruptly) but through a touching walk down the street at night and the spurned Rodolfo recalling how scared he was the first time he saw Diaz. Just like a previous scene where the new Rodolfo and Diaz connect in the dark with a flashlight illuminating their grinning faces, Jacobs is clearly not afraid to allow the uneasy messiness of life to shine through in quiet moments. 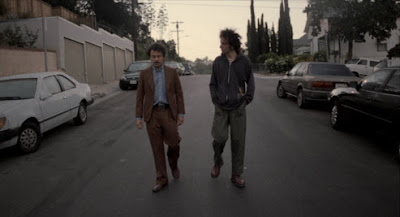 Closing with an act of self sacrifice, "The GoodTimesKid" naturally segues into Jacobs' second film, "Momma's Man". Gone is the loopy attitude around new found attraction. It's replaced with a bout of mid-life crisis where husband and new father Mike (Matt Boren) visits his parents in New York, then finds himself afraid to leave his childhood home. "Momma's Man" is the film where the youthful revolutionaries of "The GoodTimesKid" are forced to grow up. I had the misfortune to watch these films in reverse- with "Momma's Man" being a respectable but average view over a year ago while "The GoodTimesKid" was a lightning bolt experience last week. It's safe to say Jacobs is a filmmaker whose cinema of loneliness, anxiety and anger complement each other in mysterious ways. And the final image of "The GoodTimesKid", with Diaz slowly absorbing the action taken by the new Rodolfo and filmed with an unwavering three minute static shot as a source tune by Gang of Four echoes over the image, is haunting in more ways than one. Facing the future, the expression of confusion and bewilderment on her face exemplifies that maybe, just maybe, we'll get a later film that dares to explore what happens to her after this. In Jacobs' seemingly connected universe, it's only fair.