Cinema Obscura: The Dark Side of the Moon

DJ Webster's "The Dark Side of the Moon" belongs in that late 80's/early 90's direct to video market that suddenly became prominent when independent films were being plucked from obscurity at film festivals and turned a tidy profit. More chances were given and creative freedom was broadened some. Shown at a select few sci-fi film festivals in 1990, "The Dark Side of the Moon" is highly entertaining for its prescient mixture of horror and science fiction.... a film that pre dates the dead-in-space theory five to six years before the predominant favorite of that genre, "Event Horizon" and the more recent "Sunshine". It also tosses in some weird ideas about the Bermuda Triangle and the Devil, weaving together a story that offers a few chills and some mordant humor. 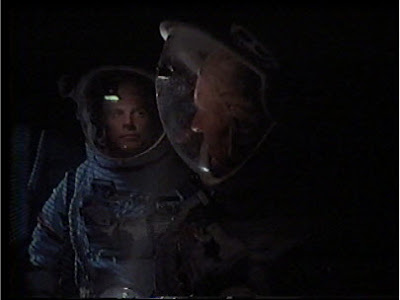 The crew of a spaceship in 2022, traveling through the dark side of the moon, come across a ship that lost communication over 20 years ago. Upon investigating, they find a fresh dead body onboard and stir up something evil at the same time. With a cast of recognizable character actors such as Joe Turkel of "Blade Runner" fame and veteran television actor John Diehl, "The Dark Side of the Moon" carries its low-budget attitude with some sleekness. The sets are believable (except one character apparently chain smokes in space) and director Webster infuses a shrewd sense of paranoia and dread as the astronauts begin to turn on one another. 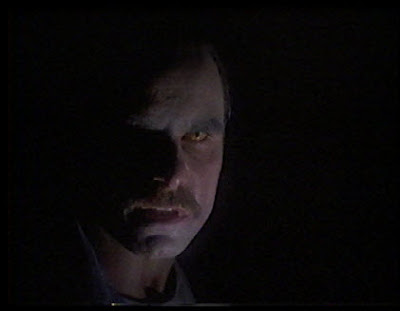 Webster would not be heard from again in or out of Hollywood, but the sordid screenplay was written by Carey and Chad Hayes.... brothers who are still producing out-there thrillers. After writing the "House of Wax" remake with the delectable Elisa Cuthbert, their latest venture included "Whiteout".... aka the film I rented only for the sexy Kate Beckinsale and ended up fast forwarding through the final 30 minutes. Since most of the pleasures of "The Dark Side of the Moon" lie in its creepy ideas and finale, there's hope for these guys to strike something original.

This film has never been released on DVD.
Posted by Joe Baker