DVD Shout Out: The Education of Charlie Banks

Most of the energy surrounding "The Education of Charlie Banks" will be focused on the fact that it's directed by Fred Durst. Yes, that Fred Durst- the singer of Limp Bizkit fame who once echoed immortal and sage lines such as "I did it all for the nookie, so you can take that cookie, and stick it up your ass." Regardless of that, "The Education of Charlie Banks" is still a very good movie about class differences while managing to heighten and draw out the subtle tension between Charlie (Jesse Eisenberg) and old school bully/friend Mick (Jason Ritter, son of John). 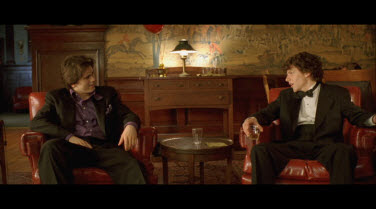 The story- one that could have stumbled into cliche territory yet remains fresh and original- begins sometime in the 1970's in Greenwich village as the aforementioned Charlie meets bad-boy Mick. Soon after seeing Mick beat a fellow student within an inch of his life, the bookish and morally upright Charlie tells the cops on Mick. He soon after recants his admission. While at college several years later, Mick shows up and slowly insinuates himself back into Charlie's life, taking up with the girl he likes and generally upending Charlie's literate and wealthy circle of friends. The pressing question (and one that writer Peter Elkoff and director Durst expand to terrifying lengths during Mick's re-occurrence at the Ivy League school) is whether Mick is aware of Charlie's "rat" status or not. Still, the impending collision between Charlie and Mick is handled with confidence, allowing "The Education of Charlie Banks" to work itself out as a low key character study.

As Charlie, Eisenberg is quickly becoming typecast as the 'new nebbish'. He does seem tailor made for the role ever since "The Squid and the Whale", but its Jason Ritter who really lifts the film. Full of charisma and taking some scenes into completely unexpected territory, he has massive potential. As for Durst the filmmaker, I suppose it would be unfair to say he does nothing to screw up the proceedings. Simply shot and cleanly edited, there are a few recognizable moments of talent behind the camera.... one of them being a slow zoom into the outside of a library as Charlie runs inside, looking for the girl he has a crush on as the camera stays outside, continuing its slow zoom until he re-emerges and runs off screen. Not only is it a visual flourish that's unique, but it preserves the sense of desperate longing surely felt by Banks. Overall, "The Education of Charlie Banks" is a great surprise.
Posted by Joe Baker