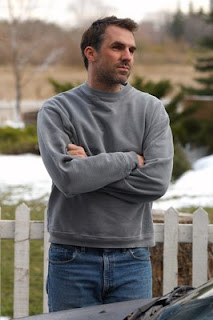 When I watched "Lars and the Real Girl" earlier this year, I fully expected to be somewhat blown away by Ryan Gosling's performance. I mean honestly, the guy made lawyer dreck like "Fracture" ultimately compelling and wholly watchable. What would he do with a juicy role like that? While I did enjoy Gosling and the movie itself, I was completely impressed by the supporting role of Paul Schneider as the brother to Lars- the older brother, settled with a pregnant wife, bound strictly by the social rules of engagement that hover over the snowy Midwestern town where "Lars and the Real Girl" takes place, and a character that desperately wants his brother to be normal when we all know that will never happen. Lars (Gosling) finds normality in other places. It's the perception of normality within Gus (Schneider) that drives a good majority of the film's emotional resonance. Schneider makes you genuinely feel for his character... the heartbreak at watching his brother carry on with a blow up doll as a real person drives him slowly up the wall, yet there's a sense of gracious acceptance towards the end of the film. Both brothers reach a certain point in their lives, and "Lars and the Real Girl" is just as much about Gus and his new family (wife and newborn) as it is about Gus, Lars and their lifelong relationship as brothers. It's what supporting characters are meant to do, and Schneider knocks it out of the park.

Thinking back, why was I so initially despondent about Schneider's performance? Here's a guy coming off a marvelous supporting turn in Andrew Dominic's "The Assassination of Jesse James By the Coward Robert Ford" in which he not only holds his own during a startling shoot-out, but also manages to sway across the screen with southern charm as the outlaw ladies man (eventually bedding down with Gretchen Mol, which kindles the aforementioned gun fight). And before that, he served as the lay-about but well intentioned South Carolina male in David Gordon Green's "All the Real Girls" (2003) and more tangentially in his debut "George Washington" (2001). Of the two, "All the Real Girls" was Schneider's major introduction into the film making stratus. It's pretty hard not to get lost in the shuffle when you're acting opposite the lovely Zooey Deschanel (just ask Will Ferrell who she ran circles around in "Elf"), but Schneider manages to hold his own in "All the Real Girls", an emo love story that starts out in mid-croon as he declares his love for Noel(Deschanel) in a dilapidated alley and then turns sour as they deal with real life. Downbeat, yes, but still one of the very best films of its respective year and the film that launched both him and Zooey as viable independent (and now mainstream) faces. Some criticisms against Schneider in "All the Real Girls" revolved around his 'aw shucks' style of casualness, but it's this persona that fits so well around Gordon Green's penchant for inarticulate middle class youngsters. Schneider does hem and haw around most of the time, but he also lets loose with some primal emotions when the times comes around... and his reaction towards Noel's distancing feels perfectly characteristic of this type of inarticulate middle class youth. Instead of cloying, Schneider embodies most of his characters as truthful and sensitive. While the real Paul Schneider may be identical to his on-screen personifications and that similarity is off-putting to some (Tom Cruise, anyone?), Schneider makes it work.

Schneider has led a relatively quiet acting career until the last 2 years or so. After partnering with David Gordon Green on several short films and his debut in "George Washington", Schneider ventured outside the Green canopy in 2005 with supporting turns in Cameron Crowe's "Elizabethtown" and then "The Family Stone" (I guess I need to check this out now). But it wasn't until the one-two punch last year in the aforementioned Jesse James film and "Lars and the Real Girl" that Schneider's face (and Southern drawl) slowly began seeping into cinematic consciousness. Schneider took his career one step further when he stepped behind the camera to write and directed "Pretty Bird", a film which premiered at Sundance this year and received good reviews. It has yet to land a distribution deal, despite starring Billy Crudup and Paul Giamatti. This is only a natural progression since he wrote the screenplay with Green to "All the Real Girls", and shows incredible talent for dialogue and interaction. 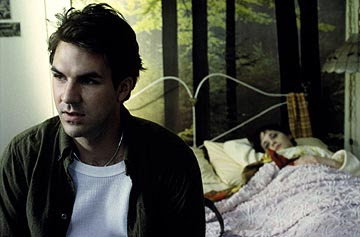 We've already seen Schneider grow up, somewhat, on screen. From his scattershot youthfulness in "George Washington" to the worrisome older brother in "Lars and the Real Girl", it's been a quick seven years for Schneider. There is a moment in "Lars and the Real Girl" where he invites his younger brother to dinner with him and his wife. It's a simple scene with Gus (Schneider) prepared to accept his brother's declined invitation like most other nights. Instead, Lars accepts and wheels out his blow up doll. There's no words exchanged, only a glance between the two of them that suggests something deeper than words. Both actors handle it with understated gestures, but there's something very sad about the way Schneider hangs his head and looks at his brother. It's these little moments that hook me on an actor. And it certainly hooked me on Schneider.
Posted by Joe Baker

Excellent post; definitely agreed about Lars and the Real Girl. The more I think back on the film the more I'm impressed with his role in the film.