Cinema Weirdo: Ecstacy of the Angels

When Cinemascope published an article last issue discussing the work of Japanese New Wave director Koji Wakamatsu, I knew I had to track down a few copies of his work. After seeing one of the (only) two films available on DVD, entitled "Ecstasy of the Angels", I'm flabbergasted and unsure if I really want to venture further. Filmed in 1972, "Ecstasy of the Angels" is definitely an acquired taste and prime candidate for any cult film junkie's list of weird and extreme. 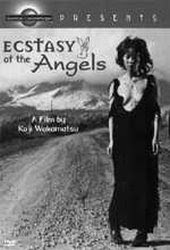 Filmed in black and white with splashes of color thrown in for good measure (and indiscriminate reasons it appears), "Ecstasy of the Angels" follows a small group of Japanese revolutionaries who deal with in-fighting, power struggles and the daily grind of having to plant 'time bombs' all over the city, including police stations and crowded nightlife spots. But, I make this sound much more exciting than it really is. Like Godard's "La Chinoise", Koji is more interested in documenting the crazy ideas of his young warriors with dialogue rather than action. There is a flurry of activity towards the end of the film- captured in extremely jerky hand held camera work that follows a succession of bomb detonations around the city- but a majority of "Ecstasy of the Angels" takes place in the cramped, stuffy apartments of the revolutionaries as they spout mantra-like sayings and fight over the cache of stolen military munitions like three year olds. To make things even more avant garde, Koji supplies all his characters with names like Monday, Friday.... while the various factions of the militant group who struggle for power are known as seasons in the year. The 'October group' initially stole these weapons from a US army base (which opens the film with a rather well staged and believable break-in), but their reluctance to use them causes the 'February group' to show up, beat the 'October' leader, rape his girlfriend and take the weapons. If nothing else, Koji does a great job of fleshing out his revolutionaries as childish, inane and pretty clueless about reason, calculation or common sense.

But, wait... there's more to "Ecstasy of the Angels" than its political dissidence. Among the various double crosses and split factions, there's plenty of sex. Clearly deriving part of the film's stance from the pinku genre that Koji worked in for several decades, it belies a universe where sex and politics are inexplicably linked. Major decisions are made during the throes of passion. Nonsequitur comments such as "a park bench!" and "smash... smash them all!" are thrown out during foreplay to... I really have no idea. It does add a great dimension of weirdness and humor to the whole affair. If the film doesn't succeed as agitprop, then it may have a great shelf life as a comedy.

Wakamatsu has made close to 100 films since 1963. The next film I've slated to see is called "Go, Go Second Time Virgin" from 1969. It sounds just as genre-bending as "Ecstasy of the Angels": After being raped in an unknown rooftop, nineteen year-old girl Poppo meets a mysterious boy, and both share their sexual traumas and fears, with fatal consequences. Last year, Koji released a film called "United Red Army" that creeped into several critics top ten lists and has been written about recently by J Hoberman at the Village Voice. Koji is seemingly still interested in the disastrous and chaotic consequences of Japanese revolutionaries as this latest film (clocking in at 3 hours) follows a faction of the Red Army from infant stages to their death in a ski lodge. "Ecstacy of the Angels" seems to be his warm-up for this later effort. It is interesting to see a man of his age still spotlighting a cause he obviously supports, but if "Ecstacy of the Angels" is meant to convert anyone to his side of the line, then it fails miserably. If you're curious, check this one out.
Posted by Joe Baker

I would love to watch this!