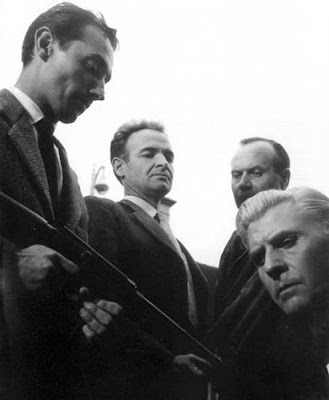 Is film noir passe? Have we, via modern times, recycled and re-invented the genre so much that a majority of its energy has been parodied, zapped out and left for dead? Well the cure for this type of dirge is to go back and enjoy the black and white melodies emanating from the films of Jean Pierre Melville, and especially the relaxed 1955 character study called "Bob Le Flambeur". Starring Robert Duchesne as the title character, Bob is a degenerate gambler who sleeps until eight every night and then stumbles through the neon lights of Paris, drinking and gambling his way to oblivion. He's a genial enough fellow, creating a makeshift family along the way in his friendship with two youngsters, Paolo (Daniel Cauchy) a small time hood and the beautiful (yet frisky) Anne (Isabel Corey). He invites Anne to share his apartment, but not for sex, but due to the fact he feels sorry for her having to walk the glittery streets in the morning hoping that an American GI or a Frenchman with money will open a door for her. She's just an inch away from prostitution, and Bob sees the tremendous damage a life like that might do to the young Anne. Through an acquaintance, Bob discovers that a local casino usually holds close to 800 million francs the night before the Grand Prix. Armed with that information (and the fact that Bob has done time in the past for robbery) Bob slowly sets a plan in motion to recruit and rob the casino. As in alot of Melville's films, good and evil are closely intertwined as Bob is friends with a local detective (Guy Decomble) and, naturally, in this world of pimps, thieves and jealousy, not everyone can keep a tight lip about Bob's foray into crime. Melville slowly boils the plot to a deceptively simple climax. Like the best of the burgeoning French New Wave cinema (which many regard this film as the first), Melville infuses more life and thought into the longeurs leading up to the crime rather than the crime itself. When most films would stage a set-piece around the casino hold-up, "Bob Le Flambeur" magnifies the small moments- the act of learning to crack a safe, the precise way in which Bob gets dressed before the robbery and looks around his apartment, and certainly the hypnotic spell that one gains when confronted with a hot winning streak. Like the best of Melville, the glory is in the details.

I first watched "Bob Le Flambeur" about five years ago when I was catching up with the films of Melville (few there are on DVD and VHS). It's unusual that 2006 was, perhaps, Melville's breakthrough year in filmmaking after being dead for over 30 years (he died in 1973 of a heart attack). Last year saw the release of his previously unseen 1969 film entitled Army of Shadows. The film went onto claim top spots in many critics' lists and renew an interest in Melville. It renewed my interest as well, forcing me to place the few Melville films I've seen onto my Netflix queue. My favorites, a close tie between "The Red Circle" and "Un Flic" (unusual because both are color efforts) are there but "Bob Le Flambeur" is something altogether different. It's a film that feels both familiar and alien at the same time. The similiarities are striking upon second viewing, however, that Melville was always working close to something basic, such as the way Detective Ledru and Bob are friends. All of Melville's films pare the film noir genre down to its simple essence. His characters are men of few words, calmly going through the rhythmns of crime with a precise attention to detail. In one scene, Bob takes all of his recruits out to a field where chalk lines are drawn on the ground mimicking the lay out of the casino. He forcefully but scientifically walks each man through his assignment, then calls it quits and hops back into the car without a word further. One gets the sense that Bob (like all of Melville's men) are floating towards an inescapable destiny that owe less to man's choices and more to the roulette wheel of chance. And that is what makes a great film noir- the idea that this is a world that defies calculation and planning, and runs by an entirely different set of rules that act like a black hole and, eventually, will suck the life and energy out of any man who chooses to step into the noir universe. Melville understood that, and Bob is the definitive noir character. If Bob could've been something else... a dentist or a construction worker... he would've been that nice guy next door. But, this is film noir, so he's a high rolling gambler who walks towards the void. The alien part comes with the way Melville's Paris feels like something out of a science fiction novel, framed at just the right moment when night is fading and daylight begins to unmask the neon ugliness. I can't think of another black and white film that uses light and darkness in quite the same way.

There's been one attempt to remake "Bob Le Flambeur", notably by director Neil Jordan in "The Good Thief" from 2003. Lacking in worn-out feel and featuring a disenchanted lead played by Nick Nolte, if anything, "The Good Thief" was to glossy to be a true noir. In a much less structured attempt, there are also some similiarities of "Bob Le Flambeur" to Paul Thomas Anderson's "Hard Eight" in 1997. The great Philip Baker Hall embodies the same type of wordless, gentle creature of the night who sulks across the Las Vegas dens and casinos with pure cool. He too befriends a puppy-dog like loser named John (John C. Reilly) and a down-on-her-luck beauty (Gwyneth Paltrow) who create a small family out of very little expectations with each other. Whereas Melville's world outlook was bleaker than Anderson's, giving the Paolo/John dependent a more sinister denouement in "Bob Le Flambeur" at the scene of the hotel robbery, "Hard Eight" is probably the closest any modern film noir has come to establishing that feel of all night activity taking a toll on the human body and mind. Both films portray the world outside of the dark gambling rooms as frustrating and encroaching. And both films present main characters who come from a life of crime and are simply waiting for that lifestyle to collect its dues. And its almost sad when those dues catch up to Bob the Gambler.

"Bob Le Flambeur" is the type of film that's easy to saddle with the monikor of film noir, and even easier to admire as a cynical and brilliantly simple representation of characters drawn to a certain type of lifestyle. I don't think film noir is dead. I just think it was done with more intelligence and passion when Jean Pierre Melville was creating masterpiece after masterpiece. 1955 and "Bob Le Flambeur" is as good as any place to start.
Posted by Joe Baker

TALKING MOVIEzzz said...
This comment has been removed by the author.
1:08 PM

Here's another view of Melville, well worth the read:
http://www.sensesofcinema.com/contents/06/40/jean-pierre-melville.html

Watching Melville and Becker, Dassin and Renoir makes one realise how much intelligence we have lost, it being replaced by an infantile fascination with glitz and gunpowder. Thanks to the people who are rescuing these masterpieces.