Notes on a Scandal

Richard Eyer’s “Notes on a Scandal”, based on a sharp and biting script from Patrick Marber, is a nicely affecting drama about the wild disintegration of a family due to one mother’s indiscreet (and controversial) affair. Playing her sensuality to the hilt, Cate Blanchett stars as Sheba, the latest faculty addition at a British school. Everyone (and I mean everyone) is attracted to her, none more so than the aged and lonely Barbara, played with restrained contempt by Judi Dench. When Sheba is caught having a sexual relationship with one of the school’s 15 year old male students, Barbara uses the scandal to manipulate Sheba into her own devices. Sounds very Douglas Sirkian doesn’t it? There are moments when the acting and tone of “Notes on a Scandal” threaten to overthrow the logical maneuvers of the sordid story, but there’s something touching and real about the motives behind each and every character step. Blanchett, looking as gorgeous and sexy as ever, easily embodies the confused, reckless persona of the bourgeous wife who’s helplessly trapped in between a marriage of convenience (to a husband played with ferocious charm by Bill Nighy) and the constrictive responsibilities of bringing up two children, one teenage female as confused about love as her mother and the other a 12 year old boy with down syndrome. It’s no wonder she continually subverts her normal life for a touch of the sordid. Dench, saddled with the juicy role of manipulator and closet lesbian, walks through the entire film with a hollow and malicious tone that is chilling and pitch-perfect, and given the film’s best dialogue in clipped voice-overs. Marber’s script, though it veers wildly into several different categories of camp towards the climax, strikes several small coups of storytelling, such as the time bomb unleashed when Barbara’s cat dies or the way the film’s explosive confrontation happens just after Blanchett has dolled herself up in fish net stockings and black mascara, trying to re-establish an emotional link to her punk rock past. And that alone is the basic idea behind “Notes on a Scandal”- how rebellious actions tend to recreate themselves over and over in our lives when complacency sets in. “Notes on a Scandal” documents that complacency, as well as the twisted obsessions that haphazardly form between two people, with damning accuracy. 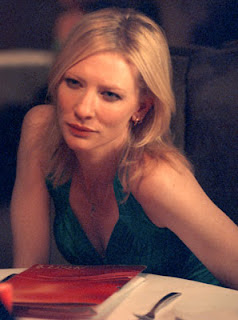 I first remember seeing Cate Blanchett on the big screen in 1998 after her Oscar winning peformance in "Elizabeth", a film whose character required Blanchett's seething sensuality to shine through layers of thick make-up and extravagant costumes. Next came the moribund Mike Nichols comedy about stressed out air traffic controllers (yea, we all wanted to see that!)called "Pushing Tin" where Cate held her own against the sex pot hurricane that was just beginning to form around Angelina Jolie. Then came the one-two punch of "The Gift" and "Bandits", two films that required Blanchett to embody diametrically opposed characters- the first being a Southern pyschic caught up in murder and intrigue in Sam Raimi's gothic horror story, and the second as a muse towards two low-level criminals in Barry Levinson's humurous "Bandits". From there, Blanchett retreated a little into more personal works, bringint to life on the screen two strong, politically motivated women in "Charlotte Gray" and "Veronica Guerin", the latter an immensely moving performance. She then became the fanboy's dream (hey, nothing wrong with that.. I"m the one writing 1000 words about her) harboring a recurring part in Peter jackson's "Lord of the Rings" trilogy as the ethereal Galadriel. But, her strongest performance (aside from her latest role in "Notes on a Scandal") lies in last year's gritty "Little Fish". As Tracy, a video store clerk desperately trying to keep her head above water from a past full of drug addiction and petty violence, Blanchett boldly carried the film's generic themes into a whole other realm of naturalistic glances and body language. As in "Notes on a Scandal", she proves that beauty can be a little fucked-up, a little intelligent and very scary sometimes. If there was any justice, she'd win an Oscar this year for her performances so far. And if not, in the words of fellow blogger Dennis Cozzalio, her's is a face I love.

This review (minus the ode to Blanchett) can also be read here.
Posted by Joe Baker

The Greatest scandal in History is
happening right now...

Under our collective noses.

Read a Reality Weblog. Then sniff the air. Detect the Starbuck's?

We are at War, but how many see what's
coming? Answer: A tiny fraction! reb