So Much Great TV, So Little Time

My TV watching continues to grow exponentially. I’ve recently been turned onto 2 new shows that have gotten their fair share of critical acclaim, but for whatever reason, never found room on my television set.

The Wire- now in its fourth season, “The Wire” is a dense and telling look inside the procedural bureaucracy of a Baltimore police department as they struggle to topple the drug trade in a sprawling apartment complex. Juggling 20 or so characters from all levels of the power structure, it’s probably one of the most informative series in years about the details of the business (both judicial and criminal). It’s also very smart, relying on the viewer to fill in small details as the series grows. Like the best episodic series, “The Wire” is equal to an epic novel, laying out the structure for a grand chessboard of movers and shakers over long periods of time. HBO continues to leverage their thirst for intelligent adult programming, and this is certainly one of the best.


Battlestar Galactica- When I traveled home for the holidays, my brother persuaded me to borrow his season 1 box set of the Sci-Fi channel’s series “Battlestar Galactica”. He told me it’s nothing like the original, only building on that show’s basic narrative structure in inventive and entertaining ways. I watched the 3 hour mini-series pilot and was hooked. And I’ve quickly come to learn what makes for rapturous viewing- take hotties from different nationalities and put them in space. You’ve got the pretty Asian pilot, the blonde tom-boy ace fighter pilot, the attractive girl next door mechanic, and a 6 foot tall luscious blond who gets to portray the evil killing machine in a slinky red dress. But seriously, this is a fantastic show that blends great CGI with enthralling characters. You can read a virtual week by week analysis at The House Next Door on both shows, and kudos to that blog (and my brother) for opening up new doors of requisite viewing. I’ll go play catch up now. 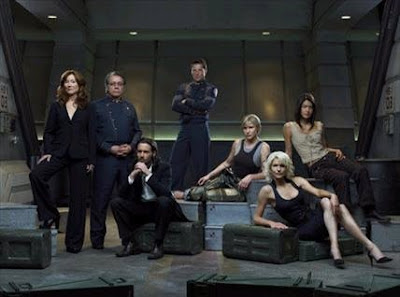 And you thought I was kidding about the pretty women?
Posted by Joe Baker

Haven't seen The Wire but I do watch Battlestar. It's excellent TV and you don't have to be a Sci-Fi lover to love it. It's just good drama.

If you haven't, you need to check out The Venture Brothers on Adult Swim. A verry funny cartoon from the creator of The Tick.

I have yet to see BATTLESTAR. I've had disc one of the first season in my Netflix queue, but it has been at Very Long Wait for a few months. May have to buy it. Should I admit I liked the original show?

And THE WIRE I've caught the end of many episodes. I liked what I saw, but never saw a complete episode. Should Netflix that too.