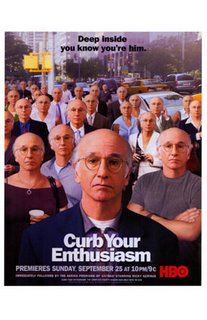 With the amount of blockbuster television shows produced by HBO each year, it could be easy for a 30 minute comedy to slip through the cracks against the more epic-themed and dramatically composed character pieces of “The Sopranos”, “Rome” and “Deadwood”. But “Curb Your Enthusiasm” hasn’t been lost, but widened and grown in popularity with each new season on HBO. This is one of my favorite shows ever produced. Each episode is written with precision and wit, where one little line of dialogue in the first 2 minutes will almost certainly come into play (often with potentially disastrous results) in the last 2 minutes. Writer and star Larry David has an uncompromising knack for creating plotlines that snake around themselves and come full circle in hilarious and unpredictable ways. I’ve heard friends and critics say Larry’s character in “Curb Your Enthusiasm” (if you can call it a character since Larry plays himself as himself) is an asshole… and that encompasses so much of what works for the show. Larry continually takes shots at himself and very rarely does anything work out for him. The latest season pits Larry in some of the more conflicting situations of the show’s history, giving him a search for his possible real parents (the theory being that he’s adopted) and placing himself amidst a moral quandary, one in which he must decide whether to give his friend, Richard Lewis, a life saving kidney transplant. The mileage out of both of these subplots is gradually tightened into a season finale that is so brilliant, I won’t even give you a tease as to what happens. See it for yourself. And if the above poster doesn't tell you that Larry David has a supreme sense of humor about himself, then you don't get it.
Posted by Joe Baker

That finale is indeed brilliant. Won't give it away either.

Glad I wasn't alone in liking this season. Many critics didn't like it. I thought it was funny throughout.

Easily the funniest show of all time