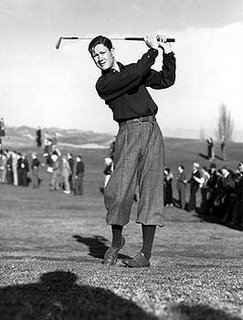 News came late on Tuesday evening about the death of professional golf legend Byron Nelson at age 94. The next day, his passing was unjustifiably marginalized by the diva-esque dramatics of another local professional athlete (whose name I won’t even bothering mention, but not because I’m bitter, but because I’m a staunch Tennessee Titans fan). Sad. Lord Byron Nelson will be missed both as a presence in the golf world and for his unwavering support of local Dallas athletics.

Compare that with the scratching and clawing that Tiger Woods has done this year by winning 5 in a row, and that feat stands as an even greater accomplishment, especially when one takes into consideration the rudimentary construction of equipment and balls in his day. 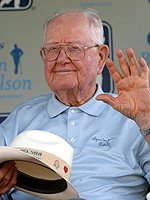 My own experience with Nelson was a little personal. His PGA tour event, the Byron Nelson Invitational, occurs every spring here in Dallas. About 7 years ago, I attended the tournament and made it my first ever professional golf event. A good friend and I wandered around for a couple of hours and then grew weary of the inconsistent views on various holes. We made our way to the eighteenth fairway and found ourselves a spot on the side of the fairway about 275 yards from the tee box and approximately 150 yards from the expansive eighteenth green. Not only did we have a perfect view of 90% of the golfers as they drove the ball down the fairway (about 10 feet from Tiger when he stuck it in the rough and about 20 feet from Phil Mickelson) but we could peer up the fairway and, with binoculars, see the tent that Lord Nelson and his wife called home for those 4 days, perched ever so preciously off the back of the green in clear view of the days action. Of course, it was customary for the golfer to finish his round, exit the green and immediately pay his regards to Lord Nelson up in his make shift skybox. The respect and emotion of the players as they shook his hand and spoke a few words was palpable. It was a once-in-a-lifetime thing to see. The event was also memorable for me because I was hit in the forearm by a golf ball from player Ben Crane, and had a 3 foot view of the shot as he played his second shot (alas, I was not on TV). He would finish 2nd in the event. Still, even a shot in the body with a golf ball doesn’t out weigh the memorable tradition that comes with being part of an event sponsored by the good will and good graces of such an enormous personality within the world of golf.
Posted by Joe Baker