Conspiracy Theories: "City of Lies" and It's Unloved Status

Unceremoniously dumped into barely recovered pandemic-era theaters earlier this year after almost 28 months on the shelf, Brad Furman's "City of Lies" probably didn't deserve that fate. It's also a film probably not bolstered by the presence of a socially embattled Johnny Depp. However, despite all these pejorative factors, "City of Lies" is a smart and involving police procedural that swims in conspiracy theories and haunted Los Angeles megalopolis intrigue. Oh, and it features a host of good performances, led mostly by a restrained Depp as the embodiment of real life L.A. detective Russell Poole who sacrificed his career and livelihood trying to legitimately solve the infamous 1997 murder of Christopher Wallace, aka Biggie Smalls.

Now the stuff of urban legend and jailhouse rumors, "City of Lies" is based on the book by Randall Sullivan, which purports that the infighting between rival rap labels resulted in the death of both Smalls and singer Tupac Shakur weeks before. And not only was this a war waged between high profile music industry types, but aided and abetted by the Los Angeles police department itself. All of this is vaguely digestible since the specter of malice and distrust that hung over L.A. law enforcement was so fresh in the minds of the world, from the Rodney King case to the Rampart division corruption that came to light just six months after the Smalls/Tupac murder.

I say it's easily digestible in theory, but what Furman does in "City of Lies" (alongside a script by also actor Christian Contreras) is blend all of this professional treason and moral distrust into 110 minutes of highly entertaining drama. 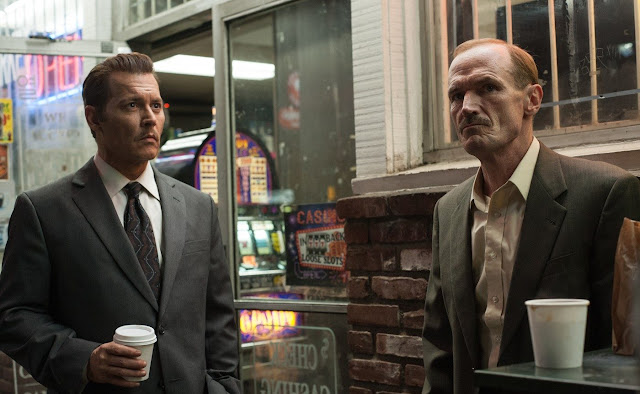 Invoking a temporal structure that begins with the now retired Poole virtually living in the evidential waste of his investigation 15 years later, his babbling constructs of truth are given some legitimacy when a journalist (Forrest Whitaker) doing an anniversary piece on Biggie Smalls comes calling. Given an ear to rehash his story, "City of Lies" bounces back and forth in time as Poole explains the many routes and byways his investigation took, and the frustration of always hitting a departmental roadblock when his clues led him too close to the actual truth.

As Poole, Depp gives a fine turn. From the moment he walks into a fresh crime scene where an undercover cop (a particularly scuzzy Shea Whigham) has shot and killed another undercover cop (Amin Joseph), the confidence and intelligence is on display. Naturally, the iconic template for any great Los Angeles crime film is the glacial sauntering of Al Pacino in "Heat" (1995), and while Depp doesn't quite reach that plateau here, the sense the film gives his curiosity is striking..... from the way he takes methodical control of the scene to the way he carefully steps and curls his body to take his own Polaroid shot of the murder scene interior without disturbing anything around him. It's the kind of tactical care rarely seen in films today where the process of solving murder is nothing more than visceral browbeating.

From that innocuous event, Poole is drawn into a netherworld of corruption that will see him taking down crooked cops, bank robbers, and eventually destroying himself in the jagged process of law enforcement. Also good is Whitaker as the innocent reporter who thinks he has a grasp on the events of late 1997, but finds himself in way deeper (and more emotionally connected) than expected. His role is the classic avatar for the audience, absorbing the abundance of information as Poole tells it in episodic fashion each time they meet. In fact, if anything's problematic for "City of Lies", it's the amount of story it has to tell. Bleeding into the Rampart corruption and the host of ideas around who actually killed Smalls threatens to sink the film in its second half, and the event that brought Poole into the picture at the beginning (i.e. the cop on cop road rage) only come into clear focus if one has done research on these stories to begin with. For the first time in a while, I hesitantly feel a limited series (yes, I know, be damned Netflix) would be the template to give this story an exhaustive treatment.

Regardless, what "City of Lies" does have to reveal is continually fascinating and peppered with the perfect casting. Hey, look the great Peter Greene! And even if the truths Poole sought will probably never be discovered, the rabbit hole of conspiracy theories, tangential whispers, and has-been ideas is probably more interesting than closure anyhow. As the films ensures to point out in a remarkably tender scene between Depp and Biggie Smalls' real producer/actress mother Voletta, we realize the relationship between the actual Poole (who died in 2015 of a heart attack while visiting the L.A. police department about new leads) and those who are now cultural ghosts extends far beyond recognition and attention. He wants the truth and she understands that. I can't think of a more altruistic path for a good police procedural than that.