We Are What We Are: On Chloe Zhao's "Songs My Brothers Taught Me"

On the receiving end of widespread acclaim with her latest film "Nomadland", it would behoove anyone interested in Chloe Zhao as a developing filmmaker to visit her feature length debut, "Songs My Brothers Taught Me". As a filmmaker wholly interested in presenting complex stories of individualistic wandering among a community rarely experienced on-screen, all of these tenets are present from the get go.

Like she did with her sophomore film "The Rider" (2018), "Songs My Brothers Taught Me" takes place with people mostly portraying themselves.... or at least thinly veiled fictional recreations of themselves. And it wouldn't be far off to wonder if that later film didn't rise out of the barren-land ashes of this film as Zhao's camera often becomes much more interested in the rodeo bucking community that fraternally rubs against her Indian reservation-set debut. But regardless of its foundations, "Songs My Brothers Taught Me" is an amazing film for the way it never seems to be in a rush of narrative. Things happen and great developmental arcs occur, but the film just captures a sense.... a time... and a place with generous acuity. 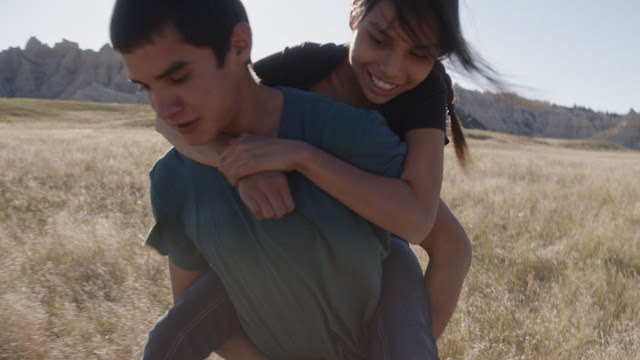 The story that eventually develops involves teenager John (Johnny Reddy) and his twelve year old sister Jashaun (Jashaun St. John) who live on a South Dakota Indian reservation. In the first few minutes, we learn their licentious father has died in an accident. It bothers the two siblings, but the film isn't about their sadness over his death. Instead, we observe as they figure out who they want to become in life. John is involved with a local girl (Taysha Fuller) and their amorous plans to leave town together loom. Meanwhile, young Jashaun observes her brother's burgeoning adulthood from outside, eventually becoming friends with her heavily tattooed stepbrother (one of about 19 children from her father around town), freshly released from prison and battling to stay afloat in a world that constantly offers little escape.

Beyond that, "Songs My Brothers Taught Me" is a mood thing. Zhao often frames the activity around the reservation in long shot, allowing for streaks of lightning to cascade in the background or curtains of sunset light to bathe the screen. The mixture of nature and man- that is so prevalent in all her work- gets first attention here. It's a beautifully rendered atmosphere for John and Jashaun to bounce around this big sky country with dour, internalized permutations of angst and unsuredness. We feel for them because although they reside in a place largely foreign to my experience, the emotions and depth of confusion in growing up are universal. Zhao seems to excel in creating these types of stories and I look forward to following her long and beautiful career.