With his previous film "Silence" (2016) and now "The Irishman", Scorsese has certainly entered his pensive period and, as a filmmaker whose lifelong investments have been people struggling with the cause and effect of inner turmoil (both spiritually and non), "The Irishman" may be his crowning reflection on the matter. As a sweeping tapestry of mid-century gangsterism and unionist history, it's a completely enveloping recreation of the stalwart loud mouths (Al Pacino as Jimmy Hoffa) and powerfully quiet sea changers (Joe Pesci as mob boss Russell Bufalino) who had their fingers on the pulse. And as a character study of one man (Robert DeNiro as Frank Sheeran) along for the turbulent and violent ride, it's a meditative masterpiece that ends on such a somber, devastating image that even after 3 and a half hours, I was still stunned it was over.

Bringing together his most star-studded ensemble yet, part of the film's magnificent poise about guilt-ridden existence long after the dust has settled lies in the etched faces of icons Pacino, DeNiro and Pesci. It succeeds not only in their wondrous interpretation of Steve Xaillan's screenplay, but in the very history of their iconic status. In a climactic scene between Pacino and DeNiro (which has been foretold as truth by one party and unilaterally denied by about every other camp in the world), Scorsese makes sure to slow things down to a crawl.... focusing on eyes, bodies and sideways glances that exudes serene betrayal at every moment. I don't imagine it working quite so brilliantly with any other actors in the world. 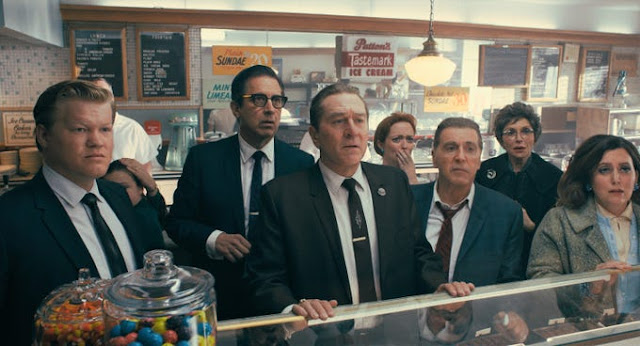 However, though the underlying emotions of the film speak loudest, "The Irishman" is, after all, a Scorsese gangster picture where the violence is swift and damning and the camera a secondary floating character to the action of men going about their routine business of killing. Bringing together disparate technical forays of his previous films (tracking shots, freeze frame light bulb clicks, text on the screen that plays with the existence of time), it's also an effort that feels at home in its place of a canon started back in the 70's with "Mean Streets" in which masculinity, religion, self esteem and consequences are wound up tight in a universe spun from the creative Scorsese mind. The only difference is that now, these men are left sitting alone, abandoned by everyone, wondering if their lives were worth the fuss. If it can't be answered now, at least part of the unique joy in cinema has been watching Scorsese and his crew of actors beg the question.
Posted by Joe Baker

Just found your site ~ you are adorable and loaded with information. Thank You for the smiles and learning. <a href=" https://klantenservices.co/facebook-contact-nederland/</a>Facebook bellen</a>