On Christian Petzold's "The State I Am In" 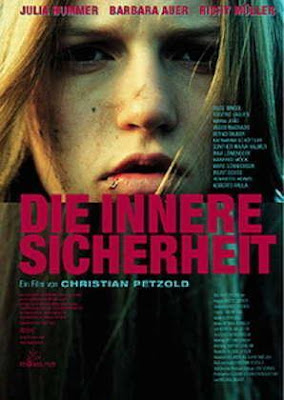 Home. It's a concept rarely explored in Christian Petzold's filmic universe. He's often content to trace the tumultuous lives of his characters through high-rise glass windows and non-descript roadways around his beloved Germany. And when the idea is touched upon- be it the destructive flux of post-war Berlin in which Nina Hoss tries to re assimilate in "Phoenix" or the simmering bedrock of boredom and jealousy that erupts in "Jerichow"- the violence and deception that erupts from such a simple construct such as "home" becomes like a mythical creature hellbent on pushing everyone out into the open. The road movie again. However, like his fellow countryman Wim Wenders, who established a career with a host of 'juke-joint soundtracked' road films (and ones that announce themselves as such very early on in their running times),
Petzold's films sneak up on the viewer and rarely telegraph their free floating ambitions until they're halfway over. We know we've been watching a succession of motels and hotels and little relation to anything other than bodies in motion, but the idea of it being a road film is obscured partly behind character motivation and mostly because of Petzold's intentions to keep us guessing.

Such is the case with "The State I Am In" (2000). Actually his fourth film but the first to be released internationally after a trio of made-for-TV products, the film is perhaps the best example of the scenario I've described above. Following a mother (Barbara Auer), father (Richy Muller) and 15 year old Jeanne (Julie Hummer), the film begins with Jeanne at a seaside resort where, although sullen and withdrawn, she befriends a local surfer boy named Heinrich (Bilge Bingul). With the machinations of a coming-of-age story set in motion, the rug is pulled out from underneath us when it's revealed the family is on the run. The nervy and jumpy father isn't just jumpy and nervy because his daughter may be falling in love with the type of boy all fathers fear, but because he and the mother are wanted for crimes against the state as part of their actions in a terrorist group years ago. In fact, young Jeanne has never known a normal life, which makes the abrupt tear away from her newfound love even more confusing and frustrating.

The rest of "The State I Am In" details the furious tug of war between Jeanne's blossoming womanhood being stifled by her parent's compulsive need to stay one step ahead of the authorities. Filming in his usual brisk, clipped style that rarely tells more than it needs to, one gets the feeling this is as close to a spy-thriller Petzold will ever get. One scene in particular in which the family arestopped at a red light and believe the police to be closing in features a wordless series of edits that punctuates the silence of what it may feel like when one understands and even acknowledges the inevitable is situated in front of them.

Yet outside of the thriller aspects in which Petzold seems to go out of his way to deflate, such as a pivotal bank robbery only shown in surveillance monitor recaps after the fact, "The State I Am In" remains grounded in Jeanne's perspective. Her parents may provide the tension that has put her on the lamb with them, but it's ultimately her picture and one that continually sees her flee their clandestine lifestyle and retreat into the arms of Heinrich where she can exist as a normal teenager. Again, the idea of home (or even a fabricated sense of being safe with someone) becomes a trap in Petzold's world and creates a fateful finale.

This being the last of Petzold's films I needed to see (outside of his various short films in the late 80's and his upcoming "Transit" set to be released this spring), I''m still content as ever to define him as one of the great filmmakers working today. And if the synopsis of "Transit" I've read holds true, his anticipation of home being a rudderless and dangerous place that his characters are desperate to flee from has only gotten more venomous over time.
Posted by Joe Baker