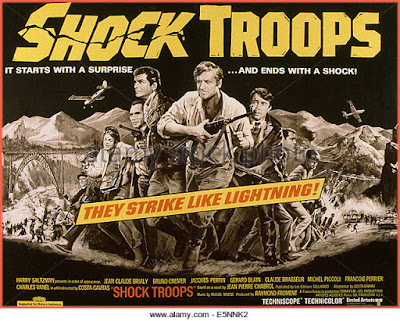 One of my favorite films of all time is Jean Pierre Melville's "Army of Shadows" (1969). A masterpiece of murky atmosphere grown even murkier by the way a hushed betrayal shatters the once-trusting bond between comrades and lovers, it's a film that distills all the madness, loyalty and violence of the French Resistance into a seamless potboiler thriller.

If that film is the austere entry in the genre of Resistance films, than Costa-Gavras' "Shock Troops" (produced just two years prior to Melville's film) is the 1980's Cannon Films meathead production of the same events. That backhanded praise aside, "Shock Troops" is no less an important statement about the travails of France during World War II than Melville's more prestigious effort. It just goes about things in a much broader (and more violent) way like an aggressive cousin to Melville's masterpiece.

Instead of focusing on the underground (yet highly visible) people of the urban French Resistance, "Shock Troops" follows the band of the Maquis, which were the groups of armed French Resistance fighters who gave German troops the most trouble during their occupation of France. Residing in the mountainous terrain around the state and moving in swiftly, killing hordes of soldiers, bombing railroad lines and government offices, the Maquis would then retreat to their hillsides safe zones which the German military controlled little insight or strategy around. It worked for awhile. One of these swift actions opens "Shock Troops" wherein the group (including Jean Paul Briarly, Charles Vanal and Bruno Cremer) stage a brash infiltration of a prison and free the group of French men inside. One of the men, played by Michel Piccoli, comes under scrutiny by the group as to whether he's a double agent or not. Not only does his presence complicate the trust and civility of the Maquis, but it clouds their judgement as German troops slowly begin to encircle their encampment in the hillsides.

Marked by several strong episodes of violence- including the finale as the group does battle with a Panzer tank that methodically zeroes in on their coordinates- "Shock Troops" is much more yell than whisper, which ultimately sets it apart from Melville's more interior rationalization of the French Resitance's ultimate 'fait de acompli'.

However, its also a film that gives amazing honor to the story of French Resistance through its unabashed glee in gunfire and explosions. Not all of the Resistance were satisfied in subtle cloak and dagger. They were armed, impatient and just as ready to crush their occupiers as their occupiers were zealous to crush them. As Costa Gavras' action-infused early film shows, there's certainly room for both comments on this time in history on the spectrum.
Posted by Joe Baker