The Reconstituted Image: Thom Andersen's "The Thoughts That Once We Had"

Like Jean Luc Godard's mammoth series "Histoire(s) of Cinema" (1994), essayist and filmmaker Thom Andersen's "The Thoughts That Once We Had" is a shifting, breathless and ultimately personal didactic about what gives him inspiration and belief in the moving pictures. You may call it an elegy... albeit a very rigorous and philosophical one as the film frames its series of clips around the writings of Gilles Deleuze. Broken down in loose sections entitled "the affection-image" (faces), "the perception-image" (war and its ugly ideals) and "implied dreams" as well as other lofty excerpts from Deleuze's applied theories on cinema, "The Thoughts That Once We Had" is best enjoyed by film enthusiasts for its constant barrage of film clips... some esoteric but many immediately recognizable. 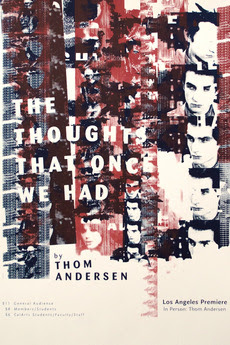 Andersen, whose proven himself a historian of both locale and film history since the mid 90's with his video essays and came to cult prominence in the early 2000's with his masterpiece "Los Angeles Plays Itself", again uses specific film images to create a reconstituted story. Devoid of voice-over and utilizing only intertitles of Deleuze's own text or typed examples of Andersen's droll sense of humor to question what we're watching, "The Thoughts That Once We Had" becomes both a cultural lesson and a personal diary of sorts. Towards the end, the focus shifts from film theory onto specific actors. Oddball character actors such as Timothy Carey. 40's Universal actress Maria Montez, who is listed as legendary underground filmmaker Jack Smith's "favorite actress". Or Andersen's confession to his own undying love for actress Debra Paget. If the excerpts of Deleuze's writing seem cumbersome or overly scholarly, it's because they certainly are, and Andersen seems to be stylizing a rhetoric of images as companion pieces for the writings. It's when the film appears to stray a bit from these formal, erudite moments and expose something personal "The Thoughts That Once We Had" turns truly magical.

Like Andersen did with his best film, "Los Angeles Plays Itself" (2003), "The Thoughts That Once We Had" encompasses a filmmaker drunk on both film itself and how film becomes ingrained in our subconscious and manifests itself in every day life. Just watching the "implied dreams" section alone gave me goosebumps as it not only features clips from some of my recent favorite films (those being Hou Hsiao Hsien's "Millenium Mambo" and Jia Zhang-ke's "24 City"), but it highlights one of the more superfluous- and in my opinion essentially intoxicating- pieces of filmmaking, which is the seductive expansion of time in film as we simply watch someone drift and walk along. With Jeanne Moreau lost in her delirious thoughts, narrowly dodging traffic in nighttime Paris or Qi Shu's neon tunnel strut, these 'drop downs' in cinema comprise a director's infatuation with their leading ladies, but they also turn film into a slow motion dream of image and music that gets me every time. "The Thoughts That Once We Had" is full of said moments and itself becomes a slow motion dream of image and music.


The Thoughts That Once We Had can be seen at the Oak Cliff Film Festival on Saturday Jun 18th and opens in limited release in New York and Los Angeles on Friday June 3rd.
Posted by Joe Baker