There's a special corner of the 'cinemaverse' for filmmakers like John Hillcoat. Bloody, unrepentantly violent and jagged, as if the viewer is running with wild packs of wolves. Just mention his adaptation of Cormac McCarthy's "The Road" and watch your partner squirm. Or, even more alienating, track down his debut 1989 film "Ghosts...of the Civil Dead" which is as bleak and unsettling as any prison film I've seen. Having said all that, I often admire his work for the unconventional and nihilistic aura he shrouds around his vision. This same give and take is present in his latest film, the grimy and star studded police thriller "Triple 9" which not only incorporates the best of this type of film, but also cribs and cajoles from the worst. 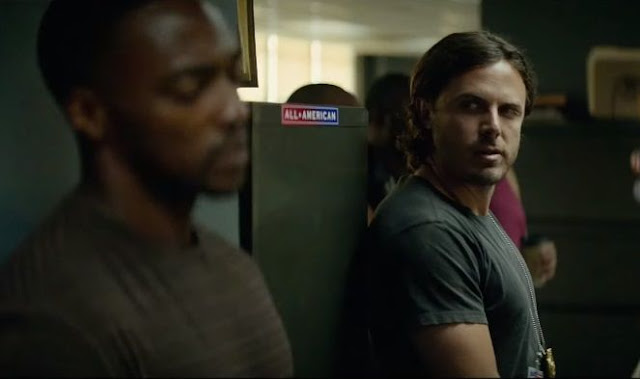 Opening with a splendidly constructed heist in which 5 men pull off a brazen daylight bank robbery, the stakes are immediately set high as we learn that two of the men, Franco (Clifton Collins Jr.) and Marcus (Anthony Mackie), are also police officers- which explains their technical wizardry in staying one step ahead of the responding officers. The ringleader of the calculated bunch is Michael (Chiwetel Ejifore), whose motivations for risking life and limb hinge upon the whims of Russian businesswoman Irina, played by Kate Winslet in a role that requires her to hiss and spout veiled threats because those Russian mafia types do this sort of thing. Replacing the Italian mob in the last decade or so, Russian heavies have become the new puppet masters to any respectable action movie. Forced to do her bidding, the crew is then coerced into pulling a second robbery that will provide her with the means to free her imprisoned husband back home in a Russian gulag.

Unexpectedly thrust into this mix of shifting loyalties and dutiful facades comes Chris Allen (Casey Affleck), transferred into Marcus' gang unit and placed in the highly dangerous cross-hairs of a crew desperately trying to work all the angles and come out unscathed. On the edges of all this lies Chris' uncle, played by Woody Harrelson, a detective in the major crimes unit assigned to tracking down the robbery suspects. Inside this tangled, knotted web, "Triple 9" spins and wields an array of stomach turning violence (even casually showing decapitated heads on the hood of a car as inconsequential gang related violence) and double crosses that leaves one wondering if anyone will make it out alive.

As a filmmaker, Hillcoat's vision is stamped all over the film, creating a nocturnal and under-lit seediness that drips off the screen. After all, this is a director who dared to film an enormously important fisticuffs in stark silhouette inside a Depression-era wooden bridge in his terrific previous film "Lawless". We could barely make out who won or lost... an impressionistic melee that had less to do with the plot and more about the enveloping darkness of the souls of those involved. Likewise, in "Triple 9", after the initial bank robbery, its a film engulfed in neon light, pre-dawn numbness and midnight blacks. It's the most impressive thing about the film.

What's not impressive is the suffocating and brooding "averageness" of every major character. Harrelson plays a cop consistently committed to the job, but addicted to alcohol and drugs, appearing in wrinkled suits and sweaty from head to toe. Far more interesting is the minor detective in his unit, played by bracing casualness by newcomer Michelle Ang. I would've preferred to watch an entire film based on her character going after the unchecked masculinity. Likewise, Casey Affleck's role as the good cop dangled in front of our senses as the possible sacrificial lamb barely registers as anything more than a sad face to grasp onto among the cavalcade of tattooed thugs and menacing bodyguards. "Triple 9" feels like a worn out script, borrowing liberally from every dirty cop film of the last 30 years. The moments of panache, generated by Hillcoat's unique visual flair (such as the odd camera shot barely keeping two cops in frame as they drive, instead focusing on the looming skyscrapers of downtown Atlanta) are few and far between, but when they happen, they suggest a stronger vision than the eventual narrative of people shooting people over and over in hopes of being the last man standing.