Any film that features several fleeting shots of landmarks and buildings that stood just a few hundred yards from my childhood home is bound to enamor itself to my heart, which is exactly what Kenneth Harrison's 1976 documentary "Jackelope" has done. Those images- captured while one of the film's subjects is making a pilgrimage down I-35 from Dallas to Austin- only last a second or two, but they serve as a monochrome reminder that no matter what happens to those structures later in life (one of which now has been torn down), they'll be preserved in the cinematic ether for a brief instant... somewhere. Beyond that tangential personal connection, the film also excels because it's an eccentric time capsule of early 1970's Texas through the visionary work of three diverse artists who mold, cut, paint or fabricate their "outsider" folk art. Rarely does a documentary so neatly blend interesting people with the atmospheric poise of the times.

Originally prepared and shown on Dallas' public access channel, KERA, in 1976, "Jackelope" recently received a restoration and became one of the many great entries presented at the 2015 Dallas VideoFest. I wrote in the primer to the festival about "Jackelope", calling it aimless, entrancing and fascinating and a film that highlights the against-the-grain philosophy of the snooty art world paradigms. Patting myself on the back, that's about as apt a description one can muster for it. 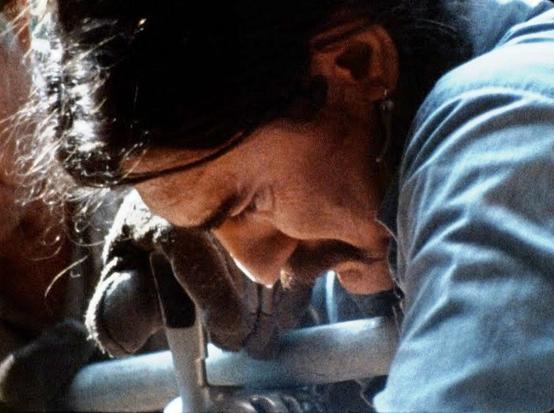 Opening on artist James Surls as he scavenges and ultimately finds the perfect tree within an overgrown field on one of those obviously blistering hot summer days we're known for here in Texas, "Jackelope" follows a certain procession of creativity. In Surls' portion, more attention is given with the actual sawing down of the tree and its eventual shape through his endless whittling of the wood into a tall figurine. We're shown the birth of his art from idealized vision to tactile representation. The second portion of "Jackelope" picks up with painter George Green in his Houston studio as he hobknobs with friends and reflects on his past. Glimpses of his art are shown, but the focus in this middle portion lies within the comfortable surroundings of an artist content and at peace with his lot in his life. The third and most rambunctious portion of the film follows sculpture Bob Wade as he roadtrips to Austin, making a pit-stop in Waco, Texas to enjoy a friendly round of shotgun mayhem and car explosions. Just like his art (which has graced so many Central Texas institutions and businesses over the years, including my college grounds), Wade is a colorful and country-funky-steampunk figure who gives "Jackelope" a boundless energy. In this third and final portion, its as if director Harrison is saying that art- come full circle- is an experience that doesn't need to be constipated or retained for a certain percentile of people. It can be wild, joyous and a completely passionate expression of someone who lives life the same way.

An obvious crowd favorite at the festival, my only regret was not hooking up with director Harrison for a chat about his work and the film. I'm sure his memories of crafting such a loving documentary are just as infectious as the buoyant personalities shown on-screen.