In what may be the film of the year, Nina Hoss nervously swaggers around the red neon-lit Phoenix bar that gives director Chrisian Petzold's film its ominous title. Leaning against the wall, hoping to catch the eye of her unsuspecting husband who believes her to be dead, an American soldier boldly approaches her and lights her cigarette, leaning in aggressively and flirting with her. She barely flinches, less disturbed at his sexually omnivorous advances and seemingly more upset that this man has blocked her view. It's not long before another soldier comes over and pulls the man away, muttering, "that's the wrong girl." The soldier flicks his cigarette and begins his charade with another woman close by. Petzold's morbid rhetoric about the power vacuum of Europe immediately following World War II and everyone's scuffle to obtain a small piece of it- which his entire powerful film is about- has never felt quite so intimate and haunting. And that's only the beginning of poor Nina Hoss and her troubles in this bombed-out existence. "Phoenix" is Petzold's fourteenth film in twenty years (including TV work), and its taken him this long to break into the quasi-arthouse, but it's well deserved and overdue.

Beginning his career in the mid 90's and hailing from the Berlin School of filmmaking, Petzold's manner is hard to classify because it settles in-between the various styles and influences of his German predecessors. He doesn't employ the hyper-fatalistic style of Fassbinder and is even less concerned with the lethargic poetry of a Wim Wenders. Yet, his films do follow three distinct ideas that classify him as an auteur distilling themes sporadically around his body of work. One, even though some of his films feel aimless at times with characters lost in thought or pondering their social status, they always lead back to a carefully realized progression. His strict diagram of emotions, memory, and painful loss often propel his narratives into sticky emotional territory. Secondly, the idea of one's place both economically and socially often drive his men and women to shadowy depths and morally ambiguous actions. Lastly, and this has been a more common theme in his later films, but a reconciliation with the past has been a major influence on his work, especially life immediately after World War II and Germany's obliteration from major power to shredded nation. Heavy themes, indeed, but ones that have been given devastating personal scope throughout his career. 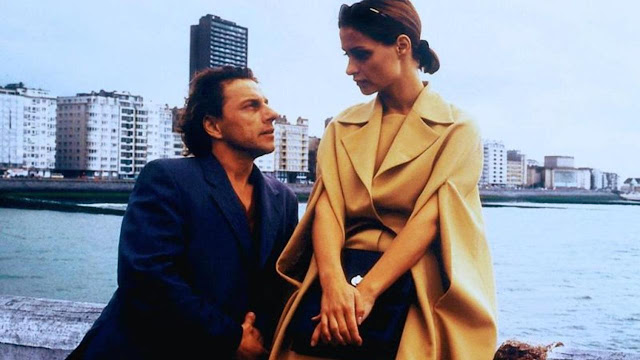 "Cuba Libre", one of his three early TV films I've been able to see (the other two unavailable include "The Sex Thief" and "Drifters"), pretty much offer all three ideas in one opening salvo. Starring Richy Muller as Tom and Catheine Flemming as Tina, two homeless ex-lovers who precariously intersect at a German bus station, the specter of financial collapse and hopelessness seeps at the edges of every frame. It'd be easy to dismiss the film as yet another dour, stifling expression of German 'miserablism' if it weren't for the unusual streaks of comedy, such as Muller's incessant beatings by another man he keeps running into at the bus station or the keystone cops-like energy towards the end of the film as two thugs try and exact their revenge on Muller. In between those fleeting moments, though, "Cuba Libre" is dour. Eventually, the couple escape their lowly circumstances....Tina via prostitution and Tom with an older man whose initial interest in him seems sexually motivated but turns out to be a murky plot of identity fraud and possible embezzlement. They both end up in a sea-side resort town with hopes of building a better life, but Petzold's moral complexity doesn't allow for such a happy excursion. Like in "Phoenix", the film takes its title from a "Rosebud" type of actual structure (bar in that film, restaurant in this one) that stands mute witness as the malignant forces of humanity shatter any hope of "happily ever after". For most of the film, we sort of root for Tom and Tina to make it out alive. We should know better. 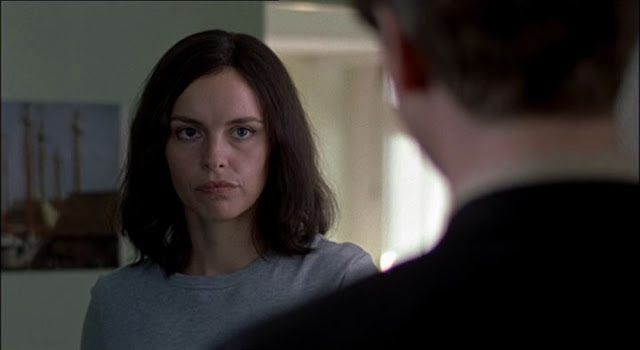 It's only minutes into Petzold's sixth film, "Wolfsburg", that darkness strikes one of its main characters when Philipp (Benno Furmann), distracted by an argument on the phone while driving, hits something with his car. It's only after pulling over that he realizes its a child on a bicycle. Afraid of losing his status as a well-paid car salesman AND the impending marriage to his fiance, Philipp drives away. Learning the child later dies, he slowly insinuates himself into the life of grieving single mother Laura, struggling not only to deal with the residual anger and disbelief of her son's death, but the meager factory job in which she has to spurn the sexual advances of her boss while devising shifty ways to steal food from the production line. Two people on opposite ends of the social spectrum, pulled together by the ghostly remnants of a dead child (albeit with vastly different interests) is the overriding theme in "Wolfsburg".

As Laura, Hoss is excellent...having already paired with Petzold in an earlier TV movie entitled "Something To Remind Me".... and the duo's creative synergy is already present. It would be easy to sink into melodramatic catharsis, but while there are moments of depression and extreme sadness, Hoss also brings a determined air about her aching mother. In between sort of falling for this new stranger Philipp in her life, she continues the search for the car of her son's killer- whose description he gasped shortly before sinking back into a coma he'd never awake from again. "Wolfsburg" becomes a tense treatise of 'will she or won't she' discover the man and it makes for a compelling drama that feels like a blueprint for Petzold's later films that examine the aforementioned "sticky emotional territory" with elegance. 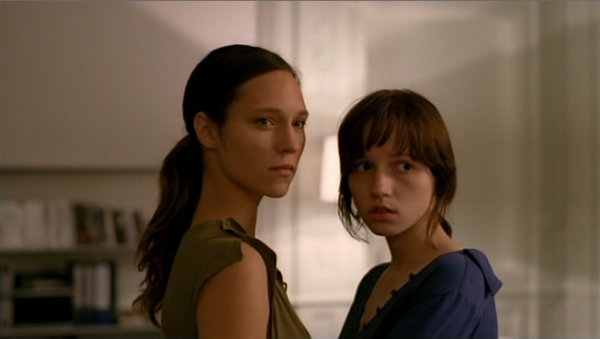 The best of his early films, "Gespenster" aka Ghosts, dispenses with the middle-aged-miserablism of his earlier films, yet traces the staunch roots of unhappiness in two teenage girls who find each other at vulnerable times in their lives. Locked into a life of orphan status and living out her days in a controlled dorm room type housing, Nina (Julia Hummer) meets Toni (Sabine Timeteo) and the two find themselves attracted to each other. Nina's affection for Toni seems more genuine, though, exemplified by Toni's off-screen tryst with the host of a party they're later invited to and her free flowing independence that causes her to promptly leave Nina whenever she feels like it. Bracketed around this lecherous relationship is Francois (Marianne Baslar), a middle aged woman who comes to believe Nina is her long-lost daughter kidnapped from her when she was just a year old. This merry-go-round of stunted emotions, unspoken bonds and half delirious craziness spins around the narrative of "Ghosts", which gives us the impression Petzold's title is a literal allusion to the dead end hopes of everyone involved. And if that's not enough, the final scene involving Nina, only confirms his status as a filmmaker ennobled with the idea of missed connections and sorrowful circumstances that plague so many of the characters in his universe.

Armed with increasing praise and positive festival exposure, Petzold would next embark on a string of films that finally gave his work some mainstream visibility and audience viability. But the trademarks that marked his earlier work would not go away. In fact, they'd even grow stronger with added dimensions of hurtful history and pure genre infusion. It was an exciting time to be Petzold.