After "Trial On the Road" (1971) and "Twenty Days Without War" (1977), two films that dealt with the experience of war (or, more specifically the absence of it in one), filmmaker Alexei German's next project was delayed almost ten years. Filmed in 1985 but not debuted until two years later at a Moscow film festival, "My Friend Ivan Lapshin" may be his masterpiece. German's visual schematic of cluttered, claustrophobic interiors and snow-laden exteriors, both barely able to contain the perpetual movement of bodies and the thoughts that spew from them, again represents German's snapshot of a particular place and time. Set in the mid 30's just before the Stalin purge of Russian Jews and the onslaught of World War 2, "My Friend Ivan Lapshin" takes its time in eventually focusing on the titular character, choosing to embellish mood and atmosphere before real narrative sets in. Like all of German's films, they can be hard to penetrate sometimes.... full of political allegory and off-hand lines of dialogue that explode with hidden anger or poetic jealousy. While "My Friend Ivan Lapshin" has its share of obfuscated moments, it's German's most accessible and tangible work. 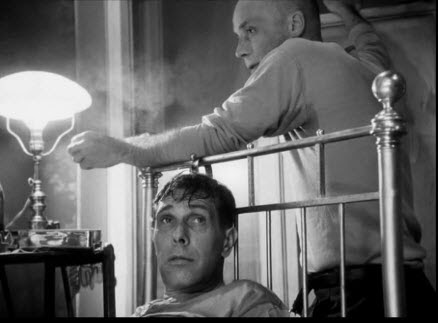 Playing out in a three part episode, half remembered by an off-screen voice over of a young child now grown into a man, "My Friend Ivan Lapshin" introduces us to its array of characters as a mixture of families and policemen living in a communal household. Boisterous and playful, we soon me Ivan Lapshin (Andrei Boltnev), the most respected and even tempered of the group. The middle section of the film introduces the relationships in Lapshin's life in Khanin (Andrey Mironov), a writer quietly reeling from the death of his wife and an actress named Natasha (Nina Ruslanova). Lapshin has a crush on Natasha, but is soon rebuffed by her when its discovered she's already started an affair with Khanin. One would imagine the potential for jealousy and third act retribution would kick into high gear after this revelation, but it's ignored by German and even has Lapshin and Khanin continuing their friendship into the final act where Lapshin invites Khanin with him on a manhunt for a group of wanted criminals. Its the final act, filmed in a staggering and tense-ridden long take, as the cops descend through a fog into a small village looking for the criminal that "My Friend Ivan Lapshin" coalesces into a prominent work. By this point, we care so deeply for Lapshin and the enveloping atmosphere of 1930's Russia that the spectre of "something big" lingers over the entire film. And even in that regard, German has a narrative surprise for us.

Viewed within the context of his larger body of work, "My Friend Ivan Lapshin" fits neatly into his themes of nationalism and scrapbook-like remembrances from his writer father Yuri. Two small portions of the film inexplicably turn into color stock, fashioned like old polaroid photographs burned into one's memory. Also, the dichotomy of society/war/lawfulness meeting the artificiality of a staged play was a large part of "Twenty Days Without War". Both films also posit a doomed relationship between the drifter/warrior and an actress.... almost as if the two columns of life can never fully mesh. And equally doomed is everyone in the film. With the sweeping changes we know from history on the horizon, "My Friend Ivan Lapshin", like Ingmar Bergman's "The Serpent's Egg" or Haneke's "The White Ribbon", is surepptitously about the passing of a generation... an observation made innocently by the final (color) image and a voice decrying the amount of traffic and tram lines encasing the city. There are no more Ivan Lapshins left.