While I was one of the very few championing filmmaker Wong Kar Wai's last film (and his first completely American production) "My Blueberry Nights", if nothing else that implied failure must have soured him on the movie business for several years. To add insult to injury, the early buzz on his new film "The Grandmaster" was that producers Harvey and Bob Weinstein assisted Wai in making cuts to the final product... a fact that seems to suggest there are 3 possible versions floating around out there. Still, with all that hoopla and diversion settled, "The Grandmaster" emerges as a ravishing film and a buoyant entry into the woozy, dream-like canon of Wong Kar Wai. 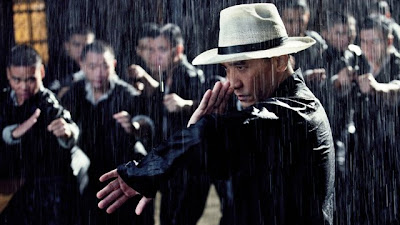 Vaguely about the life of legendary martial arts teacher Ip Man (Tony Leung), "The Grandmaster" is a sensual and aural feast, timed to Kar Wai's penchant for several things including the slow motion pan, unrequited love, and life observed through the window pane. This is probably the most mainstream art film ever released, as judged by the groaning at my screening when subtitles went unrelenting after the first scene. Audiences are expecting a Jet Li-like actioner, and they're getting something altogether different (and better).Yet beyond the action (which is supreme... one wondrous set piece after another), "The Grandmaster" hones in on the relationship of Ip Man and Gong Er, played by Zhang Yiyi and their relationship through the years of civil war and Japanese invasion. In fact, "The Grandmaster" basically deserts Ip Man himself during the final third of the film, revealing the turmoils of Gong Er and her battle to retain her family's good name. At one point, I begin to imagine the film's title didn't belong to Ip Man but Gong Er herself. Like all of Wong Kar Wai's films, the central idea eventually boils down to a man and a woman navigating their hearts through the travails of time and life. 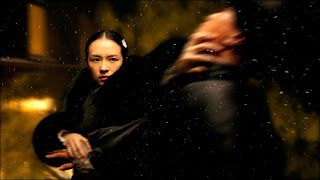 "The Grandmaster" is the reason I love going to the cinema. From start to finish, this is a masterpiece of sight, sound and heart.﻿
Posted by Joe Baker