Filmed and released in 1970, Frank Perry's "Diary of a Mad Housewife" sits comfortably in the middle of his two other films that devote themselves to the mid life crisis of their protagonists. First there was Burt Lancaster and his allegorical swim home (or swim away, depending how you look at it) in "The Swimmer", perhaps Perry's most overlooked but strongest effort of the 60's. Five years later, in 1972, Tuesday Weld literally melts away on-screen as the wife of a Hollywood filmmaker floating despondently through her sunny L.A. days in "Play It As It Lays". In "Diary of a Mad Housewife", Carrie Snodgress not only seethes with hatred for her husband (an excellently devilish Richard Benjamin), but this hatred drives her into the arms of young, handsome writer Frank Langella. This smoldering trilogy not only exemplifies Perry's penchant for moral confusion and emotional disconnectivity in his films, but it paints a marvelously vivid snapshot of America's growing disillusionment during that time period. 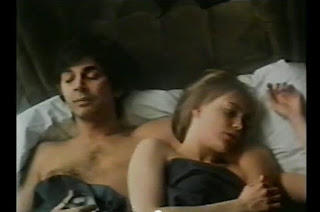 Opening and closing on the face of Carrie Snodgress in drastically different ways, everything in between is especially violent, metaphysically speaking. As Tina (Snodgress), her hum-drum upper middle class life is quickly documented through the endless preening of her husband and his ludicrous demands for social status and child rearing. Never speaking a dissatisfying tone towards him, instead resorting to passive indifference, her break with her life comes in the form of novelist George (Frank Langella) when they meet at a party. An affair begins, but even that extra-marital scream doesn't fulfill Tina. Perry and screenwriter Eleanor Perry color George in much the same light as Tina's husband.... dashing and handsome, yes, but just as self-involved and nasty as the person she lives with and puts up with day in and day out. Like Tuesday Weld in "Play It As It Lays", we sort of root for her just because everyone around her is so terrible. It's only during the final scene does the film's title come into clarification,and even that supposedly cathartic moment is clouded by the selfishness of everyone involved.

If all of this sounds dismal, it's not. Perry and wife Eleanor are masters of scraping the surface and revealing the hollowness behind people... its just always sad there's one clear-eyed woman (or man) to observe this. Snodgress does seem to eventually liberate herself. It's an obvious but astute metaphor, but the mention of a deadly plant virus that wipes out the vineyard Tina's husband invests in is apt. "Diary of a Mad Housewife" explores the rottenness that bubbles up slowly not only via the wonderful performance of Carrie Snodgress, but the re-growth that's always possible.

"Diary of a Mad Housewife" isn't available on DVD, only on OOP VHS sources, which is a shame.