Writer-director Paul Thoms Anderson has made the father-son relationship complex a recurring theme in many of his films, whether subjugated within his multi-storyline narrative ("Magnolia") or tangentially within genre ("Hard Eight", "Boogie Nights"), but his latest film, "The Master" may be his most pointed and raw effort yet. From the first time stunted, angry seaman Freddy Quell (Joaquin Phoenix) and learned doctor Lancaster Dodd (Phillip Seymour Hoffman) meet, the overtures of the father-son relationship are overt and tense in the way Dodd says "alright..." in that fatherly tone of a man siting behind a large desk, patiently accepting his sulking son's presence either good or bad. And from there, "The Master" gels into a sublime series of scenes where father and prodigal son connect, disconnect, argue, love and work through repressed emotions caused by post-war stress. For those that have called "The Master" pointless, I humbly disagree. Not only is it probably one of the most touching examinations of the push-and-pull that separates and joins people, but it reigns as a subtle miracle of the three act structure, revealing everything in small glances and a technical cinematic prowess that feels unmatched in current cinema. 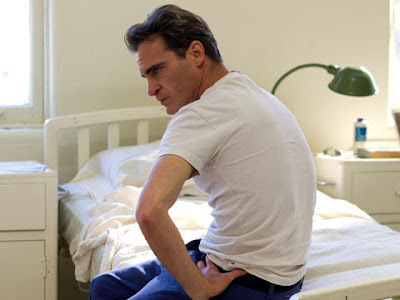 First and foremost, "The Master" is an actor's film.... positioning Hoffman and Phoenix in a verbal spar of words, emotions, shot and counter-shot reactions and pregnant pauses. Director Anderson, always looking for the opportunity to swivel and swing the camera, remains mostly passive here (save for a few delicate tracking shots and one breathlessly wonderful tracking shot across a foggy field), relying on the terrific performances and the face of Phoenix to relay the energy. Still, incredible tension is built up in every scene. This is partly what gives "The Master" its unexpected power.... the feeling that every scene is about to spin out of control into some groundbreaking moment, but remains faithful to the catharsis that Quell and Dodd provide each other and others. There's always one or two trademark P.T. Anderson set pieces in each of his films, and in "The Master" there's several of them- the initial "processing" scene, a jailhouse confrontation and especially the final conversation between Quell and Dodd.... a scene that imposes just as much quiet devastation as the "milkshake" scene in "There Will Be Blood" is violent. But, compared to that film, "The Master" is about inward restlessness and the search for happiness, whether that be through inner peace or the settling down of a family. "The Master" is bookmarked by scenes of Quell searching for something, haunted by past memories that seem to defy psychoanalysis or self-help. For P.T. Anderson, cinema is his analysis and with "The Master", he's ascended into magnificent stratospheres.
Posted by Joe Baker