70's Bonanza: The Destructors aka The Marseille Contract 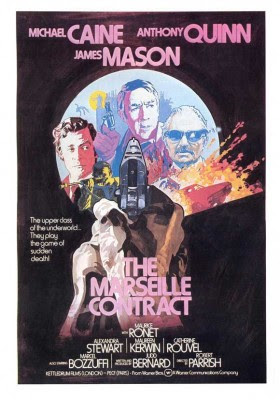 Part of the charm of Robert Parrish's mid 70's actioner is exactly what makes it just an average film... some over-thee-hill actors trotting around European locations embued with clumsy editing and Saturday afternoon style violence. Well, except for Michael Caine who sems to handle himself pretty well and gets to enjoy one helluva car ride. Recently unavailable on home video until MGM released it in its dvd-r series, "The Destructors" is an amiable way to fill 90 minutes.


It's plot consists of two stories. The first 30 minutes or so follows DEA agent Anthony Quinn as one of his agents is killed. Suspecting the local drug lord (James Mason) comes naturally as the agent was investigating the untouchable citizen. Unable to get anyone to pick up the pieces, Quinn hires assasin Michael Caine to become judge, jury and execution. The second half of the film follows Caine as he insinuates himself within Mason's organization... including falling in love with Mason's attractive daughter (Alexandra Stewart). Meandering during its half- as it introduces a love affair between Quinn and the dead agent's wife and then fails to elicit any drama from that confict of interest- this part is certainly the weakest. Quinn, who appears to be lethargic and hazy-eyed, gives an uneven performance. It's only when Michael Caine appears as the precise assasin that "The Destructors" picks up steam and utilizes its European locations to full extent. From there, the playful nature of who-will-outsmart-who gains control and the film cruises into thriller mode. Granted, I'm a sucker for this type of 70's Euro-crime, and "The Destructors" is far from the crowning acievement of this sub genre, but I found it wickedly funny and interesting enough to seek out a copy.
Posted by Joe Baker