When there’s a prolific filmmaker in the likes of Kinji Fukasaku- 66 titles listed on imdb- one can always expect a few oddities in the mix. While a good majority of his films, produced in the 60’s and 70’s, set the template for ‘yakuza’ films that deal with the complex, multi-layered hierarchy of inherent violence and betrayal, some of his best work resides in the always chic disaster Sci-Fi genre. Three different efforts in three different decades- “The Green Slime” in 1968, “Message From Space” in 1978 and “Virus” in 1980- reveal a creative artist willing to dabble in foreign territory with surprisingly good results. Through each film, which become progressively better with “Virus” being a near masterpiece, Fukasaku tackles the well worn genre with gusto and imagination. 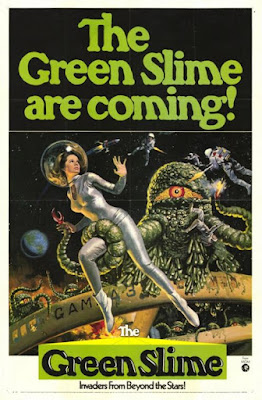 “The Green Slime” is probably best viewed where I first saw it recently- late at night on TCM after a few adult beverages. A relic of the 60’s, definitely, the film follows a group of astronauts as they attempt to land on a meteorite that’s slowly plummeting towards Earth, effectively blowing it up and altering its course. Michael Bay, anyone? What the astronauts find on the meteorite and subsequently bring back to the space station with them is a decidedly nasty alien life force that wrecks havoc. Living first as the eponymous green slime, the life force soon morphs into a monster that drains the ship of its energy and electrocutes anyone in sight. “The Green Slime” is not an especially good film, but it is harmless fun. Beginning as ‘kiddie’ Saturday afternoon serial with models and costumes that seem left over from an Ed Wood production, it soon turns into a latex-suited monster film that seems to exist as Fukasaku’s excuse to blend Godzilla and Hollywood science fiction. Even the theme song- part 60’s acid rock that lingers in one’s head long after the film itself is over- screams of the time period. I don’t regret seeing “The Green Slime”, but there were finer moments for Fukasaku. 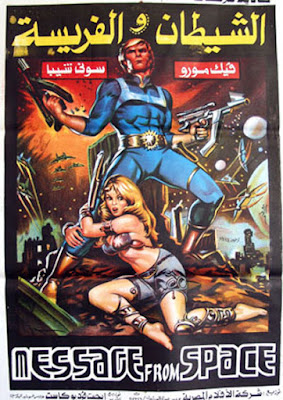 One of those finer moments is “Message From Space”, a low-rent “Star Wars” impersonation replete with a narrative that features a kidnapped princess and a rag-tag group of galactic beings charged with the task of saving her and her home planet. The inevitable cheekiness of the late 70's- and Fukasaku's own determination to chop socky filmmaking in general- also dates "Message From Space", but it doesn't belong in that "so bad its good" category. As midnight cult filmmaking goes, it's a serviceable sci-fo romp that goes a long way in creating terrific atmosphere from gaudy sets and some lunatic performances which include a Japanese pimp, two hot dog spaceship pilots and Vic Morrow joining the quest to save the aforementioned princess from a planet of marauding invaders. But redundant as it is, “Message From Space” is wholly entertaining, like a Shaw Brothers rendition of “The Lord of the Rings”. And although technological advances hadn’t quite grown beyond the model and latex suit phase yet, "Message From Space" overcomes its cheapness through a genuine attempt to specify a grand adventure within the confines of a newly burgeoning high concept genre. And, for the record, the above poster from Egypt has nothing to do with the film itself.... but I love its gaudiness.
Posted by Joe Baker