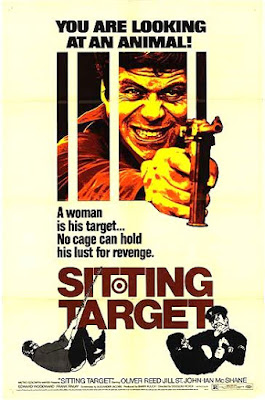 Douglas Hickox's 1972 crime film, "Sitting Target" begins as a prison break-out film before turning into a revenge thriller of the highest possible order... and all of it is very angry. Starring Oliver Reed as Harry Lomart, a British thug sent to prison, the opening moments see him sitting down for a visitation from his lovely wife (Jill St John), who proceeds to tell him that even though she's pregnant, she'll be divorcing him and marrying another man. Lomart proceeds to punch his way through the glass and unsuccessfully strangle his wife. Thrown in the hole for 30 days, Lomart has plenty of time to think of the devious ways he'll make his wife pay for her unwillingness to wait for him. Alongside partner in crime Birdy (a very young Ian McShane) Lomart makes his break from prison in a taut sequence of wall climbing and barb-wire vaulting into the free world. From there, "Sitting Target" becomes a meticulous pattern of tracking down old cohorts, procuring weapons and carrying out their plan of revenge.

Director Hickox (a personal favorite auteur for Quentin Tarantino) frames "Sitting Target" in visually aggressive ways. In prison, the main characters are represented by stilted angles behind bars. On the outside, one of the main sets is an apartment where Birdy and Harry corner and trap the girlfriend of an old cohort. There are rumblings of past deceptions amongst the band of thieves and Lomart and Birdy menacingly wait for their old partner to return home. In an apartment full of mirrors on the doors and ceiling, "Sitting Target" becomes a paranoid longueur as they flirt with the cornered girlfriend and (eventually) take advantage of her.

But it's not long before the burning desire of Lomart takes control and "Sitting Target" gets down to the nitty-gritty of its central revenge idea. Of course, this is the 70's (and British no less) and "Sitting Target" spins into a nihilistic and especially violent denouement. If nothing else, the film is worth seeing for Oliver Reed's determined performance that will almost turn your stomach for his single minded obsession for payback. Made immediately after Ken Russell's maniacle epic "The Devils", one can't say Reed wasn't pushing the boundaries of stardom.
Posted by Joe Baker