Revisiting the Faves: The Bed You Sleep In

"The Bed You Sleep In" ranked as one of my favorite films from 2002.

Jon Jost made what was perhaps his most accessible film with "The Bed You Sleep In", a modest drama that weaves two types of narrative filmmaking into a perfect blend of image and emotion. Known for his avant garde works of the 80's and 90's (which, sadly, very few are available on any type of home video distribution), "The Bed You Sleep In" was produced in 1993 but didn't see much of a distribution until 2002 when I caught up with it at the Dallas Video Festival. Part documentary about the slow Pacific Northwestern life of dwellers along the Oregon coast and part searing family drama, "The Bed You Sleep In" stars Tom Blair as Ray, a lumber mill owner besieged by all types of bad luck. A recent government initiative to tax a certain type of wood threatens his livelihood and business. He's affronted by a young wandering preacher (Thomas Morris) who warns of dire future consequences if he doesn't change his ways. Then, in an unnerving shift in tone, Ray comes home one day to find his wife, crying and distraught over the letter written by their daughter who's away at college. It levies particularly harsh blame at the feet of Ray. Crafted like an intimate novel, the remainder of the film plays out like a complicated guessing game of guilt and refusal, working itself out through its characters' slow-speech pattern and trance-like dissolves. It's certainly a Jost film. 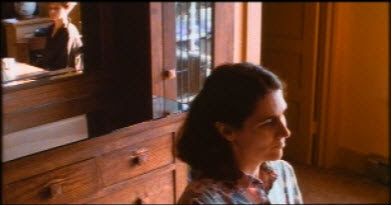 As previously mentioned, "The Bed You Sleep In" feels as if its broken into two distinct parts. For the first hour or so, Jost is content to establish mood and place through long, static exterior shots of the unique Northwestern town where the film takes place. From the rusted steel of street barriers to a gentle running stream between a rain-soaked landscape, "The Bed You Sleep In" could be taken as a tourist advertisement for the area's very Zen like exteriors. In the film's most bravura set-piece, Jost examines the minutia of the town's greasy spoon diner through an elegant, four minute tracking shot that pivots and turns 360 degress around every corner of the restaurant, eavesdropping on the customer's conversations and displaying the complex actions attributed to serving the dishes behind the counter. At first, this may seem like cinematic gamesmanship (which Jost is very adept at, by the way), but it serves a purpose as well. "The Bed You Sleep In" takes its time and seems to absorb the very lifestyle of Ray, mapping out his comfort zone so when the bomb drops later, we fall into the tragic circumstances. Basically, its the inaction of a travelogue film turning radically active later. 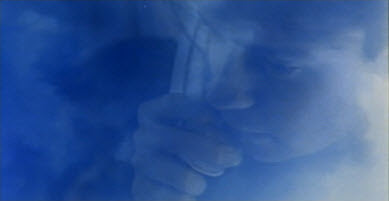 The consequences, as foreshadowed by the wandering preacher, do come home to roost for Ray, and Jost handles it with the rigor in which he handles most everything in his career... a slow dissolve with Ray's face covering the blue tinted windhsield of his car as he drives. "The Bed You Sleep In" doesn't aim for tragic melodrama, but it very nearly gets there in its own unique way.

"The Bed You Sleep In" is available on DVD.
Posted by Joe Baker