John Frankenheimer is not known for his comedies, but his mid 70's oddity about a hitman caught in the middle of a gangland war called "99 and 44/100% Dead" is a hoot. Barely released on home video and rarely shown on cable, the film begins with tongue firmly in cheek as it explores the numerous underwater tombs of the poor souls unlucky enough to be caught in the wrath of the town's mafioso kingpins. Uncle Frank (Edmond O' Brian) and Big Eddie (Bradford Dillman in a very quirky role) have littered the town (and ocean) with bodies. Frank, desperate to end the war and return to business as usual, calls upon the best hitman in the business, a silent but deadly Richard Harris. Harris returns home and rekindles his relationship with school teacher Buffy (Ann Turkel) while trying to clean up the mess of bullets in the streets. Pitted against Harris is his old nemesis, Claw Zuckerman.... a role played to lurid perfection by none other than Chuck Conners. For the life of me I can't figure out why this role isn't lauded more in the cult cinema world. Reminiscent of a bad James Bond villain, Conners plays Zuckerman as a deranged henchman with a metal claw for a hand who gets his amusement by quickly changing out the stub with various utensils and weapons in the hopes of frightening a hooker. Or the way in which he finally gives up trying to scare her and places a corkscrew on his stub to open a bottle of champagne. It's a pitch perfect performance that could only exist in the lost world of 70's cinema. 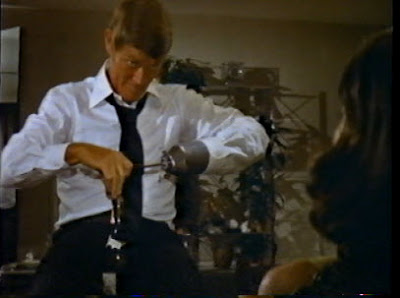 Frankenheimer is a serious director, which makes "99 and 44/100% Dead" even more funny. Partially subverting the thriller genre he racketed for many years and mostly coming off like a pastiche attempt at the pop art films of the late 60's (including catchy opening titles and tune), "99 and 44/100% Dead" never plays it straight. Known for his virtuoso car chase sequences and depth of field cinematography (see "Grand Prix", "Ronin"), it's hard to resist the humor in the way Frankenheimer posits his only car chase sequence in the movie between a limo and a huge, lumbering school bus. Or the way one dialogue sequence is filmed inside a huge inflatable blow-up attraction. Yes friends, "99 and 44/100% Dead" is that kind of out-of-left-field-crazy fun. 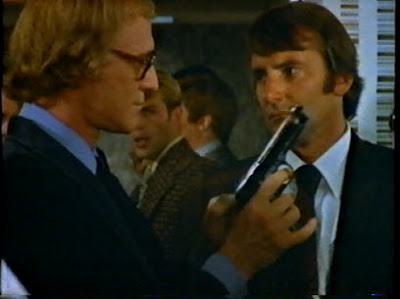