Every couple of years, the cinematic tide seems to shift, introducing the world to bold new talents, seemingly, at the same time. In 2005, I can remember the rush of watching Park Chan Wook's "Oldboy", Bong Jo-Hoo's "Memories of Murder" and Hirokazu Kore-eda's "Nobody Knows" all within a few months of each other. The same thing happened this year.... three new films from the land down under (aka Australia) that not only seem to revitalize their respected tired genres, but launch a creatively fertile group of filmmakers and artists onto the international stage.

David Michod's "Animal Kingdom" (releasing on home video tomorrow- go rent it for God's sake!) will undoubtedly remain as the single best film of 2010 for me... a lightning bolt of a film that slowly unearths somber emotions about family and revenge within the context of a James Elroy-like crime film full of police corruption, innocent victims and cold blooded psychopaths. 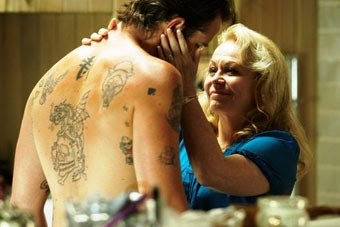 From the film's opening moments as a lush piece of orchestra plays over grainy black and white surveillance camera images of a bank robbery, "Animal Kingdom" is an assured filmmaking debut that only continues to deepen as it rolls towards a shattering climax. Our cypher into this hard boiled story of a bank robbing family is young "J" Cody (James Frecheville), left alone after his mother's overdose and forced to go live with his aunt and three uncles. Each brother seems more psychotic than the other and they keep a low profile from local cops (led by Guy Pearce) while slowly dragging J into their master plans of crime. At times violent and genuinely unsettling in several scenes of simple conversation, director Michod never employs flashy techniques. "Animal Kingdom" is all about acting, subtle editing and a terrific narrative that elicits gasps with ease.

Nash Edgerton's "The Square" is a bit more of the traditional film noir, tracking the body count that slowly rises as construction manager Ray (David Roberts) and his younger mistress and neighbor Carla (Claire van der Boom) posit a scheme to steal her husband's dirty bag of cash. In the best sense of film noir, a somewhat decent and root-worthy character is dragged into an impending abyss of violence and terrible mistakes. As in "Animal Kingdom", director Edgerton keeps the entire film simple, allowing for a twisty plot to energize the wooden narrative which dense surprises and palpable tension. Edgerton's ability with mood and tempo is perfectly exemplified in one scene where both Raymond and Carla are enjoying Christmas fireworks with their families when tragedy strikes, and Edgerton captures their rising fear with a small glance across the field. Of course, "The Square" is not without its fair share of "oh shit" moments as well. There are always casualties in film noir, and Australians are no exceptions.

Lastly, the most out-of-left-field film to cause a stir from Australia was Joel Anderson's "Lake Mungo". Part of the usually disastrous and amateurish "After Dark" film series, Anderson's faux documentary is decidedly creepy and.... truly haunting. I understand the term faux documentary and horror are hot commodities right now, but "Lake Mungo" is a quiet cousin to the bigger budget mainstream teases such as "Paranormal Activity" and "The Last Exorcism". 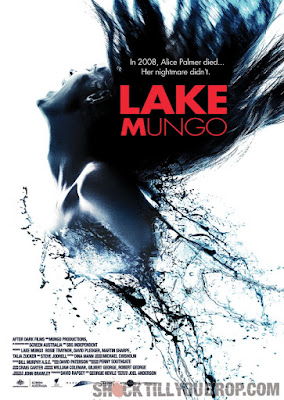 After the drowning death of their 16 year old daughter on a family vacation, the Palmer family begins to record images of their dead daughter in their house. Psychic readings are endured. Lies and a nasty family secret are upended. Then the real mystery about their dead daughter surfaces. I can't help but think the last name of "Palmer" is used in extreme respect for Lynch's "Twin Peaks".... a series that touches on some of the same deviant acts and atmospheric dread as "Lake Mungo". Anderson traces all of this as if a documentary crew is interviewing the family and along for the ride as myths are debunked and new secrets followed. This isn't a film that plays up the antics of the now rage faux/horror/documentary... it all feels very real and serious. And damn is it quite scary in certain scenes without doing very much. For once, the After Dark series went for minimal, and they hit a home run while (hopefully) divulging a great new talent.

All this space has been devoted to praise for the new Aussie wave, but what's even more interesting about this group of young filmmakers is their inter-connectedness. Edgerton and Michod have worked on several short films before- Michod as director and Joel and brother Nash starring. Ideas seem to flow freely between this cabal of artists, something that can only enrich future projects and keep Australian cinema strong for years to come. I look forward to whatever they do next.