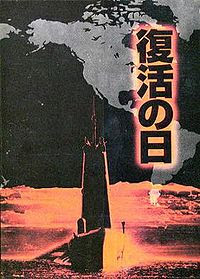 As purveyor of hyper-kinetic yakuza flicks ("The Yakuza Files" series) and the bloody cult favorite "Battle Royale", Japanese director Kenji Fukasaku is probably the least likely candidate to produce such a great (and unknown) disaster flick featuring an international cast. With Chuck Conners as a British submarine captain, Sonny Chiba as a scientist, Glenn Ford as the President, Henry Silva hamming it up as a maniacal military general and Bo Svenson as the sacrificial lamb, not to mention the uncomfortable idea of 7 women having to digest the reality of procreating the entire human race, "Virus" (aka "Day of Resurrection") is two hours and forty minutes of early 80's goodness.... and a disaster film that wipes out the Earth's population twice! Who could ask for a more guilty pleasure?

Cross-cutting around the globe as a biological weapon is accidentally released on mankind, "Virus" spends the first 90 minutes effeciently charting the world's demise and establishing emotional resonance with a few select characters, namely Japanese scientist Masao Kusakari who survives the outbreak due to his position in the South Pole where temperatures keep the virus dormant. Research stations from around the world eventually band up together and begin to chart the recreation of mankind, led by George Kennedy of all people. Fukasaku's comic-book storytelling adds a second level of destruction though. Before his death from the virus, military general Henry Silva armed the doomsday devices... nuclear weapons that could launch after a certain period of time and wipe the remaining survivors off the map for good. As the true good guys, Bo Svenson and Kusakari return to Washington DC to disarm the device, risking infection.

Very little of Fukasaku's style is inherent in "Virus". As the precursor to Japanese filmmakers such as Takashi Miike- work fast and quick- Fukasaku has crafted a genuine Saturday afternoon pleaser with little violence, no bad language and old fashioned characterizations. "Virus" may not be as slick as recent ground zero disaster films, but its no frills aesthetic and peculiar pedigree of name actors pushes it a shoulder above the rest.
Posted by Joe Baker