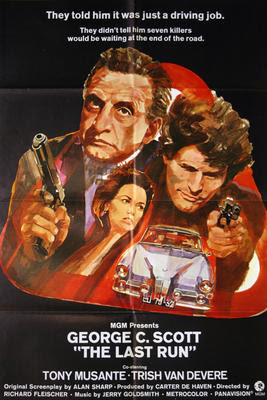 The plot is simple: an aging criminal getaway driver stumbles out of semi-retirement for one last job and ends up getting more than he bargained for. It's the stuff film noir writers have dreamed up for years. But in Richard Fleischer's "The Last Run", released in 1971 and starring George C. Scott, it feels refreshingly original and brash. A troubled production from the start, "The Last Run" barreled through several directors (including John Huston) before Fleischer came on board. It probably wouldn't have been quite as successful without the star status of Scott... an interestingly low budget choice for an actor spring boarding off his home run performance in the blockbuster "Patton" a year earlier. And it is Scott who gives the film its grizzled pessimism... portraying his character Harry Garmes as a guy who understands the consequences of a lifetime on the fringes. He doesn't wink at the audience and for that, "The Last Run" is a seriously overlooked film that ranks with "The Outfit" and "Prime Cut" as three no-nonsense early 70's examples of the crime picture done amazingly right.

If you didn't know any better, one would imagine "The Last Run" was another hard boiled script by Donald Westlake, but its not. Chock full of brisk exchanges such as:
"I wasn't in for crackin' safes. I don't blow boxes, I blow heads. When I say so, the lights go dark."

Alan Sharp, a great writer in his own accord with titles such as "Night Moves", "The Osterman Weekend", "Rob Roy" and "The Lathe of Heaven", penned the script and infuses the three way dynamic between con, girlfriend and getaway driver with grit and surly intentions.

Beyond the bristling screenplay, "The Last Run" codifies itself as the netherworld walk for a past his prime wheel man. With the exception of a few cops and border patrol guards (plus one unlucky hippie hitchhiker), "The Last Run" is populated by killers, cons, sympathetic girlfriends and whores... all spinning towards a nihilistic conclusion that seems to fall in line with the very bad luck of Harry Garmes' previous nine years. Yet this is an anti-hero of the highest order. Before leaving for the final job, Garmes goes to see a priest and confesses for what he might do... and whether the confessional box is occupied or not is besides the point. His next act of contrition is to leave a load of money with his favorite madame, then visit the grave of his dead 8 year old son. Did I mention how nihilistic "The Last Run" is? In 1971, this may have felt like leading storytelling, but in 2010, we can only see these actions as a rendezvous with the regrettable. And that's exactly what gives "The Last Run" its unique drawing power. There's muscle cars and several well edited chase sequences across its European mountainside settings, but the real motivation behind watching the film is to wonder (and most of the time root) if Garmes will somehow escape the inevitable.

"The Last Run" does get the very occasional television run, but its yet another mysterious curiosity in the binges of where-the-hell-is-it-on-dvd.
Posted by Joe Baker