If I haven't stated it enough over the past couple of years on this blog, Johnny To is one of the most prolific and creative Asian directors working today. And when I say prolific, I mean it. Since the fall of last year, he's got three films in various stages of release. I'm still waiting on his well-received film "Sparrow" which has been cited as an extremely savvy and entertaining portrait of a group of pickpockets. His latest film, Vengeance, just received a very cool trailer this week and count me in!

Somewhere in-between the above films, "Mad Detective" circulated on the festival rounds last year and I finally got a chance to see it. Those unfamiliar with To's work should know his films are often poised between two distinct types- there are his hyper-stylistic gangster films such as his "Election" films, "Exiled" and "Full Time Killer" and then the more playful genre films such as "Throwdown", "Yesterday Once More" and "Running On Karma". "Mad Detective" falls soundly in the latter category. Ching Wan Lau, To's alter ego, stars as detective Bun who uses his magical ability to place himself in the shoes of a killer and re-enact the crime with perfect clarity. After a nervous breakdown (in which he slices off his ear and gives it to the police chief as a retirement gift), Bun leaves the force. Inspector Ho (Andy On) takes over his duties, but finds himself seeking out Bun when two cops on a stakeout chase a suspect and one of the cops never returns. But, really, I'm leaving out the most entertaining aspects of this film. "Mad Detective" continually questions the sanity of Bun, along the way revealing to us that he not only uses his ESP-like abilities to solve crimes, but he can see the inner person of everyone he meets. This becomes increasingly important when the partner of the missing cop enters the scene and Bun identifes six seperate personalities within him. It's this type of vibrant and alarming lunacy that propels the films of Johnny To, threatening to sink the whole thing, yet he always maintains a firm and fantastical edge. Case in point- in one scene Bun and Ho go out to dinner and Bun constantly talks to his wife, only visible to him.... and when Bun decides to jump on Ho's motorcycle and give her a quick ride, To frames both of them on the bike, speeding along with huge smiles on their faces. Whether it's real or not, it's these types of bullient moments that infuses To's films with a go-for-broke freedom that fills me with so much joy. 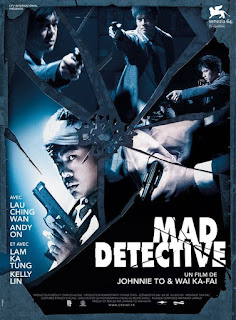 "Mad Detective" also carries on some of the usual tropes in a To film. One of the major plot points revolves around the missing service revolver of a police officer.... a device brought to lucid realization by Kurosawa's "Stray Dog" in the late 40's and a recurring idea in several Johhny To films. And, not one to deviate from the violent and balletic displays of gunfire, "Mad Detective" serves up a finale shoot-out in a hall of mirrors that loudly reverberates the prismatic shades of its main character's mind. Part of the enormous fun of a Johnny To film is the wild and chaotic shifts in mood and tone that come at you feverishly. If you're not digging the vibe, give it a minute and it might change. "Mad Detective" does this with abandon. And the final scene, as Inspector Ho wanders the room trying to get something right, To raises a significant question- where does right and wrong in our police officers start and end?
Posted by Joe Baker