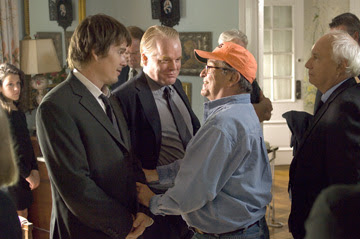 I'm a very streaky movie-watcher. When organizing my queue in Netflix or deciding what movie to see, I usually follow my admiration for the autuer theory. This means that when I see a given film from a certain director, I become almost obsessed with watching everything this particular director has done (which causes me much pain when I'm dealing with someone like Johnny To or Francisco Rosi or Edward Yang... artists who are typically under-represented on home video/DVD formats). So, my recent obsession has carried me to the work of Sidney Lumet. Granted, there are 20 or so Lumet films available on DVD, but many more are not. For every "The Hill", there's no "The Deadly Affair", and there's his lackluster "Deathtrap" but no "Daniel". Still, this is Thanksgiving and I suppose I should give thanks to the 20 or so various titles that are available (which total infinitely more than the above mentioned Rosi).

The latest work from Lumet, "Before the Devil Knows You're Dead" is a stunning return to form that feels like one of his early Tennessee Williams family-meltdown pot-boilers, complete with cheating wives, vain brothers and the nuclear family in complete disarray. Throw in a botched robbery, drug abuse and Marisa Tomei baring it all in virtually every scene she's in, and you've got a magnificent downer of a film that pulses with dread and defeatism. The film's structure, charted out by "day of", "3 days before robbery" etc. for each character adds a great deal of subtext to the film as shifting perspectives are exposed, motives are given more insight and consequences are heavily weighted. Still, this is a genre picture and its done with Lumet's usual flair for nonchalance. Long takes allow the actors to "act" and Lumet's use of the new Hi-Def format allow him the ability to crawl around the various New York apartments with little pretension (featuring one incredibly well-staged long shot in an apartment with Philip Seymour Hoffman that, at first, baffles the viewer with the scene's motivation but sets up a later confrontation). The acting is uniformly high-wire and frantic as the robbery goes horribly awry and one begins to get the sense that Lumet is most comfortable with guys burning at their wits end (see "Dog Day Afternoon" and "Prince of the City" for further evidence) and Seymour Hoffman and Ethan Hawke are more than up for the challenge. "Before the Devil Knows You're Dead" proves that age has no bias in the business of movie-making.

Lumet's 1982 film, "The Verdict" also presents a man at his lowest point, this time featuring Paul Newman as an alcoholic 'ambulance-chasing' lawyer given his biggest chance to do something good when he accepts a malpractice case against the Catholic Church and one of their care facilities. I'd seen "The Verdict" years ago, but its verbal wittiness (scripted by David Mamet) and tight-fisted, sure direction by Lumet flowed over my head until this second viewing. I can't think of a more austere (and telling) opening shot in his work than the image of a silhouetted Newman playing pinball against a large bar room window... an image Lumet would revisit several times in the film, revealing a slow shift inside the lawyer's persona. He starts out at the bottom and rises to something noble and when the courtroom finally appears in this 'courtroom drama' over 2/3 of the way into it, it crackles with tension and suspense.I guess a film about survival in the courtroom as a metaphor for survival in life shouldn't be a surprise when we're talking about the director of "12 Angry Men".

"The Hill", filmed in 1965 and starring Sean Connery, aims its sights on military abuse when five soldiers are court-martialed and sent to a British military prison. The fight against corrupted forces only comes in the final 20 minutes of the film. The rest of the affair is spent observing the grueling punishment as the soldiers are forced to march up and down the sandy hill in the center of the camp as well as the verbal dissolution that's hammered into each soldier. One of the beauties of all of Lumet's films is how careful he is with structure and detail of the milieu his film is investigating. In "the Hill", so much time is spent on the destruction of man via artificial elements (the hill, the staff sergeant's baton, robotic commands of 'march' and 'on the double') that one gets lulled into the same hypnotic rhythms that imprisons the soldiers. Also, this film features some of the most fluid tracking shots you'll ever see. And the ending is a stunner, complete with an abrupt cut to black and the idea that good most certainly won't triumph over evil.
Posted by Joe Baker