Not Made In the USA

In a video taped interview, Abel Ferrara was asked what motivated him and he replied (in his usual droll, gravelly tone) that he got up each morning, and that was all the motivation he needed. If that was an honest reply, and not endemic of his cantankerous presence around interviews and media types, then that motivation was about to be put to the test.

After "The Funeral" in 1996, Ferrara saw major studio funding come to a halt. Whether it was his disheveled working attitude or the public's waning attention in his pessimistic and hard-bitten tales, Ferrara began shopping his ideas overseas. It didn't take long to find international financing, and in an oddly positive way, this separation from studio money allowed Ferrara to open his films up more. As is often the case, European backing gives more freedom to creative artists, and Ferrara was not one to let the grass grow beneath his feet. Starting in 1997 with "The Blackout" his films became more loose and experimental, basing their stories in mood and idea rather than pragmatic narratives. Whether his visions were following an addicted Hollywood director through a maze of booze, drugs and (possibly) murder, or documenting the mostly mundane world of Puerto Rican drug selling in New York, Ferrara dispensed with old styles and invented new ones. While this phase of his career is no better or worse than the rest, it surely has been the one less seen by the movie-going public.

"The Blackout" was accepted to the 1997 Cannes Film Festival, and that was the largest audience the film received before living its life on home video. Mostly fascinating for its introduction to Ferrara's new visual applications (namely the Avid editor that allows more freedom than traditional editing devices), "The Blackout" is nonetheless a maddening experience in every way possible. Starring Matthew Modine as Matty, a hot shot Hollywood director, he decamps to Miami to pick up his relationship with French actress Annie (Beatrice Dalle). When she leaves him due to his excessive drug and alcohol addiction, Matty goes on a bender with fellow artist Micky (a truly bat-shit crazy turn by Dennis Hopper) and meets a nice waitress also named Annie (Sarah Lassez). Matty blacks out and we're transported 18 months after this night where Matty is back in New York and married to Claudia Shiffer. But images of murder continually creep into Matty's subconscious. Add to his depression that Annie may have been pregnant and had an abortion, and Matty returns to Miami to figure out what happened during his drug-induced blackout. Ferrara's attraction to problem-addled directors (including Keitel's sexually conflicted turn in "Dangerous Game) is clearly a theme Ferrara wants to explore. Here, we're given multiple sides to the director-as-a-personality and neither Modine nor Hopper give much hope to this profession. One continually escapes reality through abuse and the other is completely lost in the fabrication and creation of his video/film- even obsessed enough to allow murder to not compromise his artistic vision. "The Blackout" is a very dark portrayal of filmmaking. While it's not widely celebrated as a success, its a film that works well in mood. It's here that Ferrara began to play with the slow dissolve rather than cut, and those slow lurid transitions highlight the splintered dementia of Matty. Certainly the most dream-like of all his films, "The Blackout" is also Ferrara's "Vertigo", or more specifically his "Lost Highway", a film also released in 1997 that paints time and memory with the same nightmarish brush. Hammered by most critics, "The Blackout" fared even worse on home video where its production company chose to immortalize the 10 second scene within the film where Matty and Mickey join two drug selling brunettes who get high with them and make out together. Their lesbian embrace was used as the cover art for the release on VHS and DVD, further marginalizing Ferrara as a purveyor of cheap sleaze. "The Blackout" deserved better. 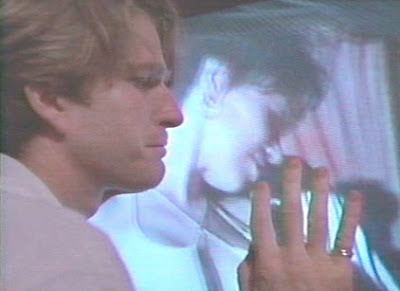 The very next year Ferrara produced "New Rose Hotel" and his strike-out with a large release was again noticeable. I'm not sure if a crowd would've helped this film any. Starring Christopher Walken and two names that would re-appear 10 years later in "Go- Go Tales", Willem DaFoe and Asia Argento, "New Rose Hotel" is a muddled and visually cluttered tale of corporate espionage in a futuristic setting. Adapted from a short story by William Gibson, the film wallows in dreamy slow motion shots and exhaustive dialogue that fails to energize any of the plot points.

Ferrara rebounded just three years later with the release of "R-Xmas", capitalizing on the success of HBO's "The Sopranos" and landing lead roles for Drea de Matteo and Lillio Brancato as, simply, the Husband and the Wife, who lead perfectly upscale New York lives, purchasing the hottest Christmas presents for their daughter and happily dancing with friends and family on Christmas Eve. But there's a dark side to their existence as Ferrara follows them to a separate apartment where they methodically cut and store cocaine for their lucrative drug business. One of his best films in years, "R-Xmas" is a simple documentation of the mundane details of this couple's lives- that is until Ice T shows up and kidnaps the Husband, bribing the Wife for all the money they have. From that halfway point in the film, Ferrara's leisurely focus shifts into a tense, unrelenting quest as the Wife attempts to gather all the money she can. The stylistic choices of Ferrara return to form; there are the long medium shots, strategically placed on the corners of the various New York apartments so a seemingly innocent pan can follow the characters around in medium shot for minutes at a time. Over a third of the film follows the Husband's Puerto Rican accomplices (one of whom is played by Ferrara regular Victor Argo) as they speak in their native tongue, non-subtitled and all. And Ferrara's fascination with the dissolve over the hard cut permeates every inch of the film, creating images that linger against one another in poetic fashion. There's a raw authenticity to the entire film that pulsates even before the tempo is upped by the kidnapping plot device. It's a strong film that was highly regarded by New York critics, but found little fanfare with anyone else. 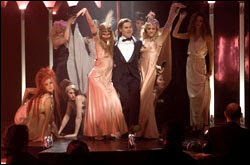 Around 2003, Ferrara moved from New York to Rome where he now calls home. Both of his next two films were created on the legendary Cinecitta sound stages. "Mary", concerning a filmmaker's passion to create a film about Mary Magdalene that comes crashing down around him (starring Matthew Modine in what sounds like yet another brutal analogy of movie-making as a profession) and this year's "Go Go Tales" were written about widely at their various festival debuts. Both have their strong supporters and their adamant detractors. The polarization of his work continues to this day. While "Go Go Tales" has yet to be released outside of Cannes, there is talk of this film being released on an independent scale early in '08. Being hailed as Ferrara's ode to Cassavetes and "The Killing of a Chinese Bookie", its most talked about aspect is the fact that actress Asia Argento plays a stripper whose on-stage antics include french kissing a rottweiler. It's nice to know Ferrara hasn't softened in his old age.

It's been rumored that Ferrara is currently in pre-production on a prequel to "King of New York". Whether that return to the mean streets of New York is needed to elevate him back into the public consciousness remains to be seen. Whether this film makes it to American shores or not, it's good to know that Ferrara has not given up. As long as he continues to create personal works, I'll continue to respect and admire a vision that represents truths hardly seen on the movie screen. The idea that a filmmaker can create disturbing, alienating works is certainly reasonable. There are many filmmakers whose visions I don't enjoy. But with Ferrara, the collision of disturbing images, messy and improvised moments, and uncomfortable themes of Catholic guilt make him even more interesting. His films have carved a special space out of recognizable territory. White it's easy to revoke his films for their informal style and messy composition, it's less than easy to shake the power of his message. We're all fucked up in some way and redemption is just around the corner for those who choose to accept it. His characters are often addicted and malicious personalities, but they reveal shades of hope as well. It's all in how you perceive things. Here's to hoping we get another 17 films from Abel Ferrara.

Matty wasn't a director in the movie, he was a famous actor.

Duly noted... thanks for the correction! I take it your just as much a fan of Ferrera as me?