Disclaimer: I love "Shaun of the Dead". I think it's an inventive film that, along with Danny Boyle's "28 Days Later", audaciously does something new and fresh with the 'zombie movie' genre, while remaining loyal to its roots of political and social commentary that every 'zombie' movie since 1968 feels compelled to display. Directed by Edgar Wright, it's a film that features two leading characters (Simon Pegg and Nick Frost) who want nothing more out of life than to burn out in front of the TV playing video-games and wallowing at the local pub. It's only half-way through the film that they realize their mundance English life is being quickly usurped by fleash eating zombies. That's the nifty idea (and very sly attack) that plays out in "Shaun of the Dead". It's also a film that doesn't shy away from the gross out theatrics inherent in the 'zombie' genre. While "Shaun of the Dead" clearly understands where it's coming from, it's also a pretty decisive affront to modern comedy as well- filled to the brim with humorous images and witty banter that outlaughs so many comedies of the past 15 years.

And all of the above applies directly to "Hot Fuzz". This is a film that continues Wright, Pegg and Frost's uproarious terrorizing of genre to take aim at the action film, placing a London supercop (Pegg) in the small English country town of Sanford where the biggest crime of the day is a missing swan. But like in "Shaun of the Dead", we soon learn that rustic houses and suburban life is pretty much incarnate evil. And like the previous film, "Hot Fuzz" navigates through a well-tread genre, elevating the level of screen violence, unpredictable moments, and rapid-fire dialogue that comes so fast that it hardly gives the viewer time to wipe the tears of laughter from their eyes before they miss the next line of precise humor. Quite simply, "Hot Fuzz" is a joy on just about every level. 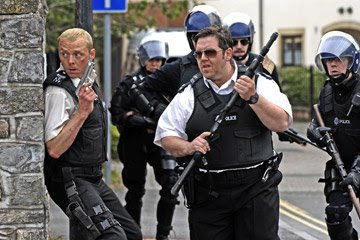 The reliance on movie in-jokes often indicates a level of juvenility within the modern comedy, but "Hot Fuzz" is something altogether different. Though it features homages to the grand finales of both previously mentioned films and toys with the buddy cop relationship of the "Lethal Weapon" films, "Hot Fuzz" is simply not just waxing funny on Hollywood itself (though several scenes are timed to the fast forward, exposed images that Tony Scott favors). The characterizations are so strong, the humor so prevalently funny and the comedic timing of dialogue delivery so perfect that "Hot Fuzz" comes across as a lovable and knowing extension of the action film- on a tighter budget of course. And while alot of this piece focuses on the comedy, rest assured, "Hot Fuzz" also explodes in the final 30 minutes into a fairly persuasive action film that doesn't sacrifice any good taste. And, remember all those great 80's action films that ended with the good guy and bad guy embroiled in hand to hand combat on top of a building or inside a rain soaked factory yard? Well, "Hot Fuzz" has something for everybody.

This review and many others can also be read here.
Posted by Joe Baker