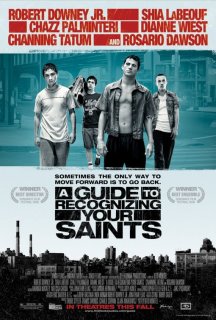 A Guide To Recognizing Your Saints

First time director Dito Montiel’s “A Guide To Recognizing Your Saints” is a harsh autobiographical look back at his youth on the mean streets of Astoria, Queens in the mid 1980’s. From the film’s opening moments, Montiel introduces us to an intimate world of family and friendship that totally blindsided me by its greatness. Opening in 2005, Dito (played in adulthood by Robert Downey Jr in yet another devastatingly perfect incarnation) lives as a writer in Los Angeles who’s just written the film’s title. He receives a phone call from his mother (Dianne Wiest) letting him know that his father, Monty, (Chazz Palminteri) is sick and won’t go to the hospital. This, of course, opens up a floodgate of memories for Dito as he flashes back to his younger, wilder days and hops a plane for home. We quickly meet his close group of childhood friends, Antonio (Channing Tatum) is the volatile Robert DeNiro of the group- and while this comparison seems naïve, Turner embodies a hulking character whose violence and strong headed machismo resonates deeply throughout the film- Nerf (Scott Campbell), Joey (Kyle Benitz) and Mike (Martin Compston) a transplanted Scottish boy who plants the seeds of journey into young Dito (Shia Lebouf). And where would a story like this be without first love, tenderly rendered by Diane(Melonie Diaz) the pretty girl whom Dito sneaks up the fire escape for nightly. The conflict comes from familiar sources too, such as the clash of cultures within the neighborhood that pits these five against a Puerto Rican group whose graffitti vandalism encroaches on their turf. But handled more subtly is the dynamics between Monty and Dito- we often get the sense that Dito and his father are more friends than father and son and Monty seems over-affectionate to Antonio, who himself suffers from an abusive relationship with his own father. There are moments in “A Guide To Recognizing Your Saints” that roll along with such force and emotion, that Montiel feels like a natural born filmmaker, infusing his personal heartache into strong characters breathing within a vivid time and place. Montiel’s handling of edits, sound, and music are also powerful, such as a scene in Dito’s kitchen between his father and group of friends that explodes into stark images and quick cuts to black. Montiel also handles the return home of Downey Jr. with care and vulnerability, searching for small answers that come in revelatory conversations with his mother and grown up Dianne (played by Rosario Dawson). And while such personal material can be hard to translate without lapsing into melancholy, Montiel finds a way to craft a clear eyed version of his life, allowing strong acting and electric filmmaking to take over the balance of the experience. I love finding unheralded gems such as this. The name of Robert Downey Jr. brought me to the theater and I discovered a true talent in Dito Montiel who has crafted one of the finest directing debuts in several years.

With five films under his belt, its been amazing to see director Christopher Nolan grow as a filmmaker (although to be honest, with a film like "Memento" as your second film, I suspect there was very little growth, simply the need for discovery for a talent already in progress). "The Prestige" takes its cue from the fractured narrative of "Memento", pitting two magicians (Hugh Jackman and the consummate Christian Bale) against each other in narcissistic and ultimately violent methods of one-up-manship. Even though we've already experienced one feature this year charting the contrivances of 19th century magicians in Neil Burger's "The Illusionist", Nolan's film is a bit more cynical and looks a helluva lot better. And then you have David Bowie embodying Nikolas Tesla... who could ask for more? "The Prestige" is thoroughly enthralling and continually forces you to pay attention as it skips back and forth in time and place.

Sophia Coppola's "Marie Antoinette" is a nice companion piece to "Lost In Translation"- both films deal with anachronisms, a person impeding on a culture with observer-like status, often caught with a what-the-hell-am-I-doing-here stare. And like "Lost in Translation", Coppola feels right at home in documenting the listlessness of her main characters, freeing the narrative from strict plots and subplots, employing her camera to leisurely capture stunning images of life in a constant motion even when there's no purpose. I didn't want a history lesson, and "Marie Antoinette" certainly isn't that. Kirsten Dunst flits through the film in airy, charming ways. Her Marie is a kid in a candy factory, thrust into royal stature without any sense the implications her spending and nonchalant days in the country will eventually have on her people. And, gladly, those days of violent overthrown= are rendered in just 5 minutes of screentime at the end of the film. We've seen too many historical lessons, and Coppola's film, instead, chooses to create a punk rock version of the French queen, full of gorgeous sets and humble humor (and some startling images timed to 80's hits).
Posted by Joe Baker