Mann Does It Again? 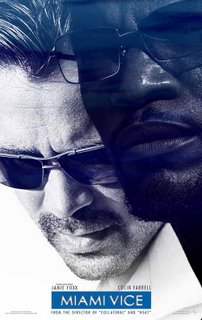 The early reviews are beginning to come in on Michael Mann's "Miami Vice". First, there was the strong buzz from Jeffrey Wells on his blog. Then, David Poland weighed in with his opinion. Now, Ain't It Cool News has another compliment to Michael Mann's latest digital crime thriller. Since early May, this film has been touted as the film of the summer for us serious minded film geeks. And who in a million years would've thought that a film entitled "Miami Vice" would get the blood boiling? But the bottom line is that Michael Mann (outside of Martin Scorsese and Paul Thomas Anderson) is a singular presence within modern filmmaking whose films oooze style, mood and exhilerating grace. Go back and watch the first 20 minutes of "Ali", as music, jump cuts and nervy handheld camerawork build to an electric crescendo. Pick any moment out of "Heat" or "The Insider". Stare at the beauty of the possibility of digital film in "Collateral". And for the really adventurous (as well as seeing where the roots of a character like Neil McCauley stems from) go back and watch Mann's 1981 mini-masterpiece "Thief" starring James Caan and Willie Nelson. That's right... Mann had the foresight to recognize the acting prowess of Nelson back in 1981. It's hard not to get excited over a new Mann film when you study his ouevre. Every film nails time and place perfectly. And, for the sheer logistics of a shoot-out, no one films things quite as brazenely and honestly as him. July 28th. Mark it on your calendar.
Posted by Joe Baker

I'll watch anything by the director of 'Heat'! Mann put together one of the greatest crime films ever with that one. Per your advice, calendar marked.

I told you I marked my calendar! I saw this last week. Excellent! Not a wasted moment!