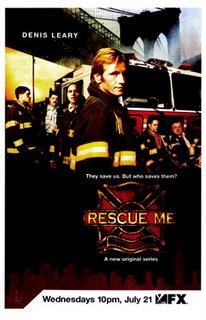 Anyone who remembers the short-lived televison series called "The Job", which ran on ABC for only 6-8 episodes during the spring of 2001, will fondly recall these moments that gravitated Denis Leary from stand up comedian to full bodied actor, complete with venemous diatribes and side splitting humor. Each episode of this 30 minute series was a mini-masterpiece of situational comedy. The times spent frentically bouncing between his wife and girlfriend and the infamous episode where Leary is trapped in the restroom of a police station with a crazed gunman solidified Leary's conviction of creating a new kind of televison comedy- one without strict rigors of plot. The fun within "The Job" were the tangential conversations that carried on for 3-4 minutes and the show's (almost) disdain for plot resolution. At times, nothing happened in this show, but it was funny as hell. Now, Leary and producer Peter Tolan are back with "Rescue Me" on FX. Now in it's third season, I didn't catch on to this show until late last year. Like so many fantastic marketing coups in the home video market, FX wisely released the first 2 seasons on DVD shrewdly before the season's new episodes, giving us slackers the opportunity to catch up before a new barrage of humor and emotion were layed out on the screen. And those recurring faces from "The Job"- Lenny Clarke as his uncle Teddy and Diane Farr as Laura Miles, the first female firefighter in the house- immediately signal that "Rescue Me" is more than a new series, but a fresh progression of things started four years ago on "The Job". "Rescue Me" is endlessly entertaining, casually shifting gears between rapid-fire dialogue that strikes the funny bone and sobering moments of dramatic invasions. This is a show that's dares you to pick up on things the first time. There are scenes where one liners are tossed at random, barely giving us a chance to catch our breath from laughing before another line is dropped. If nothing else, "Rescue Me" is best when it captures the macho casualness exuded by six guys as they sit around a small table, smoking and chatting. Fighting fires is secondary to the documentation of how this group of guys interacts. Chasing pussy, weaseling out of a given circumstance and gay jokes are MUCH more important in this world. Still, "Rescue Me" succeeds on the charms on its acting and writing. It's bracing and energetic television that deserves to be seen. Oh, and "The Job" complete series (19 episodes) is now available on DVD.
Posted by Joe Baker

'The Job' was good stuff. 'Rescue Me' and 'House' are the best thing to happen to TV since Monday Night Football.