My affections for Ridley Scott's "Alien" came in a roundabout way. It was one my father's favorite movies (along with "Blade Runner", "Cat Ballou" and "Angel Heart"- wonderful tastes in film I may add!). I tried to watch it several times during my teenage years, but always seemed to either lose interest or shrug off its more than modest conceits as a sci-fi horror. Then, about 6 months ago- when the buzz for Scott's supposed Alien prequel "Prometheus" began to reach its fever pitch- I decided to dive back into "Alien" in all its Blu Ray glory. Perhaps by coming at the film with a less jaundiced eye or relating to the film through its many imitators and sci-fi horror practitioners, I realized the sheer greatness of the film only recently. Made in 1979, "Alien" could have been released in 2009 and I would not have batted an eye. It's visual gravitas, narrative brilliance and embedded horrors put so many of the genre's other efforts to shame. 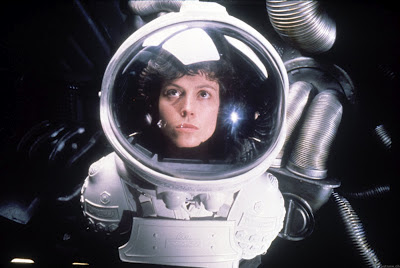 The narrative brilliance I speak of is Scott's long-winded desire to make Ripley (Sigourney Weaver) the eventual hero of the film... and the franchise face. Sure, there had been women heroes before whose quest for survival derived from their victim status (rape to revenge or assault the system by crime), but here was a woman hero who outlasts the danger and actually kicks ass on her accord. Upon original release, I'm sure untrained eyes were just waiting for Tom Skerritt or Yaphet Kotto to retaliate against the evil alien life form. But they were just pawns on the board, disappearing in order and timed to a screeching soundtrack that seemed to propel the alien forward. Also, besides the now infamous John Hurt stomach emergence scene, I was quite taken aback how bloodless "Alien" works. Unlike the future installments, "Alien" gets its point across through unsettling lighting, quick cuts of protruding alien tongues and, my favorite, death through the eyes of a cat.

I don't know how good "Prometheus" will be, as early reviews are diving the critics, but one can always return to the original greatness of the "Alien" franchise and relish the moments that created such a terrific series of films... and broke some genre ground in the process.
Posted by Joe Baker