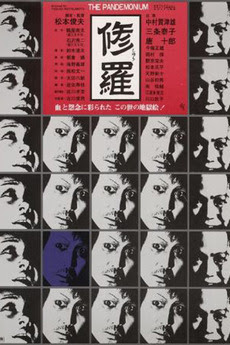 Toshio Matsumoto's follow-up to his avant-garde-shot-across-the-bow "Funeral Parade of Roses" (1969) was this bleak, nocturnal samurai revenge epic titled "Demons". Released in 1971, "Demons" couldn't be more different than that debut feature. Where that earlier film seemed to exist as a fly-on-the-wall experiment- blending Godardian nouvelle vague and queer cinema theatrics into a student film like adrenaline rush- "Demons" is measured and even patient at times, wallowing in its inky black and white images as if Akira Kurosawa wanted to get very dark....literally and figuratively. But this patience is often shattered by shocking acts of violence. Always a fan of the spurting squib effect, Matsumoto and "Demons" uses the sword and its devastating impact on the human body to angry effect. Throat slashing and quick swipes to the chest are felt and experienced quite unlike any other samurai film. And then there's the twisting Shakespearean acts of deceit and revenge that ultimately take hold and push the film's unrepentant ronin Gengobei (Katsuo Nakamura) farther and farther into the darkness. "Demons" may be a sophomore film for a director who left behind only four feature titles, but it places Matsumoto in the hallowed echelon of Japanese New Wave directors who not only successfully regurgitated an emblematic moment of their nation's history, but managed to graft something exciting onto the shadows of the past as well.

And shadowy may be the best description for "Demons". Without a hint of daylight observed once during the entire film, "Demons" is a film whose characters exist in a netherworld or purgatory. Gengobei himself is a lost samurai, devoid of his rightful place serving his master and involved with a geisha named Koman (Yasuko Sanjo). When Gengobei comes into possession of money that will buy back his rightful place in the ronin contingency, Koman spins an elaborate charade to rob him along with her lover Sangoro (Juro Kara). Unwittingly setting in motion a series of violent confrontations, double-crosses and seething retribution, "Demons" obliges its dark aesthetic by pulling no punches in its savagery. Just witness what fate Matsumoto (and writer Nanboku Tsuruya whose play the film is based on) hold for even the most innocent of children.

Choosing to call itself "Demons" seems perfectly apt. The opening scene of the film observes a group of people running through the darkness carrying lanterns..... discombulated bodies swallowed up by the night as the only thing visible are the lanterns bobbing and weaving as they move. This eerie yet calculated image sets the tone for a film that refuses to give light to anyone. It's as if everyone involved has already sunk into the netherworld, becoming remorseless carbon copies of themselves. Demons. And like his transvestite youngsters in "Funeral Parade of Roses", they're living a life they've accepted on the margins of reality. It may not be pretty, but at least its true to them.