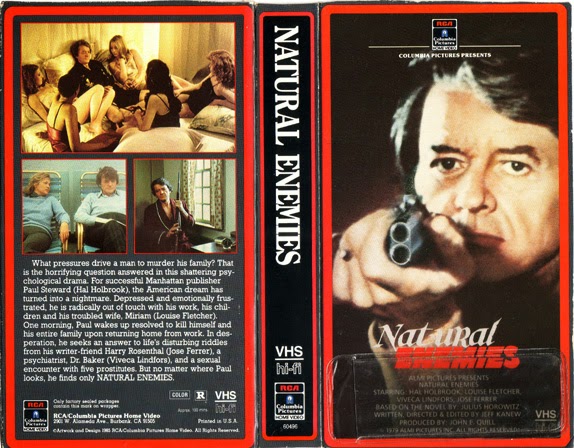 In the opening scene of Jeff Kanew's "Natural Enemies" (1979), the lead character named Paul Steward (Hal Holbrook) brazenly tells the viewer via interior monologue his plan for the upcoming day- which is go to work, take the train home and shoot his wife, three kids, then himself when she calls him down for dinner. From there, his misery-filled odyssey is the remainder of the film. He tries to rationalize his upcoming actions with several people he meets throughout the day, and one, a friend played by Jose Ferrer, sees the upcoming internal apocalypse and takes him out for a drink. There are moments when we feel the crisis may have been inverted. During lunch, he visits a brothel and arranges to be with five women at the same time. In keeping with the film's verbose patterns, Steward ends up talking more than screwing, lying naked and facing his prostitutes as if they were a Greek chorus, lamenting his loveless marriage and searching for acceptance in a life filled with little physical passion. In flashback, we see the deteriorating, almost spiteful marriage he shares with his wife (Louise Fletcher). Dealing with emotional problems of her own, neither wife nor husband are shown to be completely blameless. Basically, "Natural Enemies" is a trenchant assault on the nuclear American family of the late 70's. Scripted in a novelistic fashion, full of rambling stories by its characters, and unafraid to hold its unflinching gaze on Hal Holbrook's slowly dissolving moral core, "Natural Enemies" strikes at something raw. It belongs in the same category of disturbed nihilism that bore "Joe", "Taxi Driver", and Gaspar Noe's "I Stand Alone"- films that place the viewer firmly inside the hermetic, dangerous mind of its unhinged protagonist with little hope for escape. 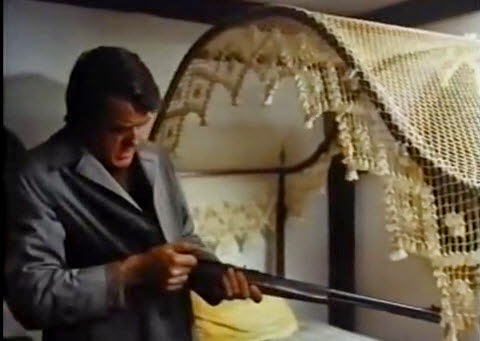 Written, produced, directed and edited by Jeff Kanew, it's no surprise "Natural Enemies" has yet to find its way to mainstream home video distribution. Even for the liberal 70's, it's a dark and almost rotten experience from the beginning, but one that certainly shakes up the senses and challenges the viewer. It also feels strangely European in tone and pace. Privy to Holbrook's thoughts running underneath the entire film, we begin to wonder how much is true and how much is being sickly reflected through his own memories and unbalanced recollections. Case in point- towards the end of the film (and assuredly the film's finest scene) Holbrook takes the fateful last train ride home when its suddenly frozen on the tracks due to a fire up ahead. The emergency lights kick on and bathe him in a woozy, red light as the woman next to him (played by Patricia Elliot)  starts up a conversation. She talks about the lost attraction to her husband, writings in a diary that will never see the light of day, then plainly asks Steward to make love to her "right here right now".The consecutive abrupt cut shows Steward leaving the train as normal. Either this is one of the many unfulfilled fantasies banging around his head or the film is showing us the pervasive unhappiness seeping into the entire universe. Either way, its a gentle respite in the oncoming hurricane of emotional turmoil.