The cult of Carruth is strong, at least here in Texas. Widely praised (both locally and globally), filmmaker/editor/producer Shane Carruth stirred the intellectual juices in 2004 with the release of his time travel indie "Primer".... so much so that entire web sites and complicated timelines have been established over the years to explain and justify the thoroughly confusing narrative. I, personally, have seen it three times, and only upon viewing it this week did I realize two more aspects of the film I'd never understood before- quick snatches of images (an attic door) and a conversation ("what did you say when you first came in?")- that add new rivets of comprehension to an elaborately realized plot. But, if one hasn't seen "Primer" (or Carruth's hotly anticipated new film "Upstream Color" that I'll be seeing tonight and was cause for minor celebration during the Dallas Film Fest last week), then I highly encourage it. Instead, as with the rest of this series, this review is more attuned to the setting of a film rather than the usual analysis/opinion. 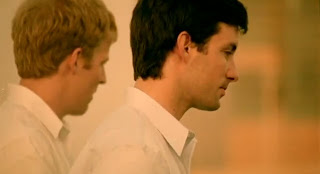 Filmed for reportedly around $7000, Carruth's vision of urban Texas, and specifically Dallas, isn't the high watermark for regional cinema. Due to budgetary constraints, "Primer" is a real low-fi effort, examining the ugly fluorescent interiors of storage lockers and warmly lit urban sprawl homes with precision more so than illuminating the magnificent downtown skyline at night. Yet it works for this film. Aaron (Carruth himself) and Abe (David Sullivan) are seemingly stuck in the same bureaucratic, dead end computer tech lifestyle of the Richardson/North Dallas area much like the characters in "Office Space", albeit with much less comic timing. Anyone who has ever spent time in the Richardson area understands this description, a direct northern suburb of downtown Dallas whose sole architectural palette are rows of endless, non descript office buildings and criss-crossing highways. "Primer" nails this flat landscape with alarming precision. It's fitting that one of the movie's central scenes (both through exposition and visually) sets the duo amongst a cascading water fountain at night, the sounds and deep blacks of the night serving as a powerful contradiction to the sun-lit, concrete scenes that directly proceed this conversation. After that, we're back to the landscape of office buildings, garages, and cramped vertical apartment complexes that dominate the film. Both in editing (snap-bang style of images and sounds that repeats itself like that of Aronofsky or P.T. Anderson) and visual style, Carruth knows what he's doing and milks the North Dallas area for all its banal glory. 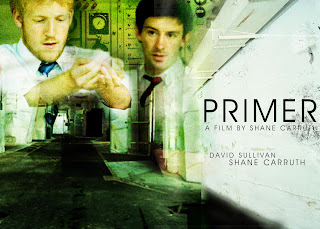 By saying all the above, I don't mean to degrade Richardson or North Dallas- hell Richardson will soon be home to the coolest cinema spot in town once the Alamo Drafthouse completes construction of its multimedia center and diner. Some areas are natural overflow for the megaplex of a downtown, and Richardson happens to hold that title. Perhaps its this reason filmmaker Carruth decided to utilize that area as the setting for "Primer", just as he does in his latest film "Upstream Color". Non-descript overflow for downtown can be the most insidious pockets in a city. And while the endless permutations of time travel are front and center in "Primer", Carruth subtly implies that covered garages and Uhaul storage lockers (which are in every city and town) can be ground zero for real psychological horror.
Posted by Joe Baker