Edward Yang's second feature, "Taipei Story" gives us glimpses of the impulses that would drive a majority of his later work. Though the film stays primarily focused on a couple instead of the panoramic array of characters that will embody his films directly after this sophomore effort, there are striking hallmarks within "Taipei Story" that make it a necessary stopover for anyone interested in this greatly under-represented filmmaker. 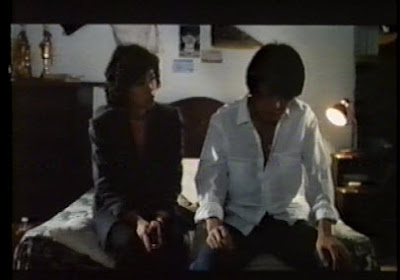 Charting the romantic demise of a couple, Lung (Hou Hsiao Hsien) and Chin (Chin Tsai), "Taipei Story" can be seen as an allegory for Taipei itself. In one of the film's early scenes, an architect who works with Chin stares out the window (a prominent theme throughout the film) at the Taipei skyline and comments that he can barely remember which buildings he helped design. It's an ominous quote that will hang over the remainder of the film as Chin and Lung grow apart and become indecipherable to each other. Chin's company is purchased by another and her job is deemed "redundant", so she quits. Lung, unable to really let go of the past, travels to America to visit family and returns with faded dreams of emigrating there and helping his brother-in-law with his business. After a brief conversation- and a walk through a spacious apartment building that Chin wants to rent in the opening scene- Yang keeps his couple apart with missed appointments at karaoke bars and Lung spacing out in front of a television set watching tapes of last year's baseball games. There are no great arguments or heavy emotional conflicts between them. Silence, indifference and the restlessness of being together for so long gently wash over the couple, and Yang's patient camera and sense of impending dread take control and turn "Taipei Story" into a cautious little thriller. There are eventual outbursts of violence and a finale that hurts, but overall, "Taipei Story" works in little flourishes. 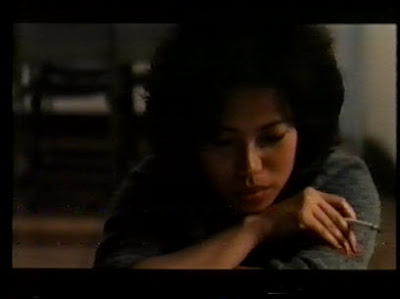 As part of the revolving group of creative artists who spearheaded the Taiwanese New Wave, actor Hou Hsiao Hsien would make a bigger name for himself as a director. It's not hard to imagine a terrific career as an actor as well, emoting so much through his slumped shoulders and the way he uses his hands to cover his face while smoking a cigarette. Likewise, actress Chin Tsai- who would later be Yang's wife for several years- creates a full blooded character. There are slight flirtations with a male coworker, but we get the sense that she truly loves Lung. By placing her in the upscale corporate world in a time of major technological upheaval, it's easy to understand the massive confusion she's facing both professionally and personally. And as a final perfect ending- the image of her staring out a high rise window, unaware of what's happened to Lung below, encapsulates so much professionally and personally for all involved.... director Yang as well. Taipei would never look the same.
Posted by Joe Baker