Revisiting the Faves: Until the End of the World (5 hour cut)

Until the End of the World ranks as my number 7 favorite film from the year 1991. This is a review from the 280 minute German PAL DVD. 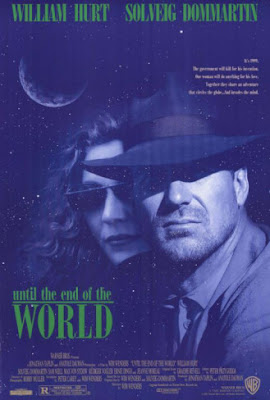 Directed by Wim Wenders at the apex of his critically acclaimed career (following "Wings of Desire"), "Until the End of the World" was released in 1991 after a long production stint that spanned several continents, languages and level of actors. As a science fiction film, its loopy and goofy. As a road movie, its mammoth. And it's also a typical Wenders film in that it sharply divides the viewer. Those of us Wenders devotees abolsutely love it while others remember the film soley for its remarkable soundtrack. Add to the cocktail mixture the fact that the film was severely truncated upon U.S. release (cut from over 5 hours to two and a half) and one gets the sense that "Until the End of the World" is one of those great, inpsired acts of personal filmmaking that will never receive its actual due. In my small part of the universe, this is an attempt to give Wenders and his full version the recognition.

Essentially a five hour love story between nomad Claire (Solveig Dommartin) and on-the-run cyber fugutive Sam (William Hurt), "Until the End of the World" works in an apocalyptic story concerning a satellite that's crashing to Earth and the unsure effects of this radialogical disaster in the year 1999. Claire meets Sam in a subway terminal and falls in love with him when he asks her to help him escape a bounty hunter. Sam has smuggled out some technology from the States.... a device which allows him to record images and overlay his own thoughts on them, all in the hopes of delivering color images back to his blind mother (Jeanne Moreau) in Australia. Along the winding, arduous journey across four continents is Eugene (Sam Neill), Claire's jilted lover, whose voiceover leads the narrative and is unwilling to accept her love for Sam. Longtime Wenders collaborater Rudiger Volger also stars as a cyber detective helping Eugene track down the lovers on the run. Over the course of the film human connection becomes elusive. Wenders has his characters find each other, spend harmonious time together, and then wake up the next day to find various factions have moved on with their own independent goals to another city or country. And everyone else has no choice but to continue the global chase. Inevitably, this rag-tag group of scientists and detectives converge on the Australian Outback after the satellite has crashed to Earth and caused all electronic communication to fail. Through all the globe-trotting, "Until the End of the World" keeps its gaze on the sweet romance between Hurt and Dommartin. The futuristic, post-punk aesthetic is firmly in place, yet Wenders and writer Peter Carey have essentially crafted a screwball road movie with an innocent couple at the helm.

From the originally released two and a half hour version, the director's cut never alters its original story, allowing the longer version to develop and linger. Conceived as a mini-series, the 5 hour version also plays like a TV movie, dividing the film in three parts that could be subtitled as "The Chase", "Going Home" and "Home". While the first two parts deal with the connection and flight of Claire and Sam to Australia where his mad scientist father (Max von Sydow) and mother reside, the final 90 minutes hits moments of deep sensitivity as a son tries to not only win the acceptance of his father, but give his old mother the sense of sight. It's here, in the final third portion of the film, where Wenders' themes of technology and aimless collaboration between various road-warriors really begins to gel. The final 90 minutes of "Until the End of the World" is a moving and powerful examination of memory and regret. One can bemoan the time it takes to get there, but once it does, "Until the End of the World" feels like Wenders' most heartfelt experiment to date.
Posted by Joe Baker

Labels: archive, my fav movies, Not On DVD, reviews

An impressive post, I just gave this to a colleague who is doing a little analysis on this topic. And he is very happy and thanking me for finding it. But all thanks to you for writing in such simple words. Big thumb up for this blog post! technology world