HBO Does It Again: Broken Down Ballplayers

By all accounts, I really shouldn't enjoy Jody Hill's "Eastbound and Down". I've made my stance pretty clear here in the past- modern comedy, with the exception of a few pieces here and there, has gone down the tubes. It's all improvised sketches expanded to (boring) feature length premises or misogynistic and cruel. "Eastbound and Down" is all of that- with Will Ferrell as a producer to boot- but it also strikes some pretty deep down moments of empathy while maintaining a steadfast view of a true sociopath.

The idea, now finished in its second season, follows a once good relief pitcher for the Atlanta Braves named Kenny Powers and his (mal)adjustment back into society. As the vulgar, cocksure Powers, Danny McBride sets his tirades to autopilot and his confident showmanship up to 11. Moving back home with his brother (the excellent John Hawkes) and re-kindling a flirtation with his high school girlfriend April (Katy Mixon), Powers chooses to be a gym teacher as his new post-baseball profession. Every self-absorbed, largely delusional figure has to find himself a sidekick, and here enters dim witted fellow teacher Stevie (Steve Janowski) to join Powers in his many adventures around suburban North Carolina. What follows is less an episodic series than a trenchant, brutally funny portrayal of Powers' attempts to cash back in on his limited success and win back his former girlfriend. Creator and sometime director Jody Hill has assembled a cast and crew that fully understands the absurdity of the situation, refusing to pull any punches and keeping the tone as black as possible. For example, the first time Powers sees April after years, the camera slowly zooms in on her face in a likely sweet moment of reconnection before it alters the zoom onto her breasts. Dirty yes, but its these harsh, unsuspecting moments consistently break the monotonous and reclassify "Eastbound and Down" as an uncompromising study of a dark heart. 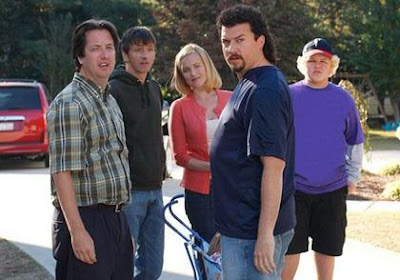 Season 2, which picks up right after Powers has an "oh shit" moment in the finale of season one refreshes itself with a change of venue (Mexico) but refuses to soften the character of Kenny Powers. He connects with an amateur baseball team, finds romance with another beauty that he surely doesn't deserve (Ana de la Reguera) and traces for roots of his past. But while the first season spends a majority of its time establishing the bleak worldview of Powers, season 2 breaks through the nihilism a bit. In one scene of an episode directed by David Gordon Green, a bit of haphazard tenderness seeps into the closing moment as Kenny and Vita (de la Reguera) ride a roller coaster. The expression of free-falling bliss on Vita's face and Kenny's half-hearted acceptance of being in that moment with her resemble the shaggy-dog honesty that Green formalized in his early film efforts such as "All the Real Girls" and "George Washington". Alongside Wayne Kramer's evocative score, this scene more than makes up for any of the jokes that fall short or any scenes that run on just a bit too long while McBride improvises his vulgar dialogue.

I'm just beginning the first season of "Boardwalk Empire", another tent pole HBO success that, most likely, gives Jody Hill and co-writer Ben Best more of a creative leash with "Eastbound and Down". Rarely talked about... at least in the circles I travel anyway..."Eastbound and Down" is a show that deserves to be discovered. While Larry David has the market cornered on subtle aggravation and social quirkiness, Kenny Powers is the real psychopath. But at least his baseball card is still worth at least five dollars.
Posted by Joe Baker

I just happened on your blog and really like your work. You have found a reader in me. Please keep up the good work.