Before emerging as an international cult favorite with the slow-burn thriller "Cure" in 1997, Kiyoshi Kurosawa was deeply mired in producing efficient and violent direct to video yakuza cheapies. The six part TV series "Suit Yourself or Shoot Yourself" (1995-1996) had made Kurosawa a well known artist in Japan, and this gave him the license to create further experiments in the yakuza genre, playing with conventions and, ultimately, not really taking the genre very seriously. "The Revenge; Parts 1 and 2" were prime examples of a filmmaker whose boredom with the idea of the embedded yakuza culture gave way to seeing just how oblique he could make the well-worn genre look.

If some studio were to bless Kurosawa with the finances to create an 8 hour gangster flick, I'm certain he'd run with the idea. Like his later films "The Serpent's Path" and "Eyes of the Spider", Kurosawa takes a central theme and tweaks it just enough to back end two films together in alternating fashion. Starring long time regular Sho Aikawa, "The Revenge; Parts 1 and 2" tracks a man's existence from goodly cop to incessant revenge-driven killer after his wife is murdered by the local yakuza. Part 1, titled "A Visit From Fate", is the better of the two parts, building up a slight back story for Aikawa's cop Anjo as his family is murdered before his eyes while he cowers in the closet as a scared five year old. Spared by the seemingly aloof killer, Anjo grows up to become a policeman. After a drug suspect kills himself when running from Anjo later in life, his body is picked up by a guardian, who turns out to be the seemingly benign killer who spared his life as a child. Anjo's tracking of the guardian leads him into the spotlight of a local yakuza gang, so they murder his wife as a warning. From there, Part 1 and Part 2, titled "A Scar That Never Disappears", follows Anjo on his quiet but violent quest to exact revenge. 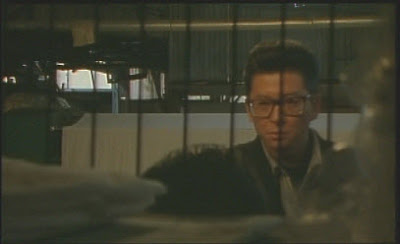 "The Revenge" feels like a Takeshi Kitano film with all its blank faced gunfire and languid swagger. Anjo and the overweight yakuza member who soon becomes his primary target cross paths at least 4 times and fail to kill each other as they shoot from twenty yards apart, leaving their brawl to continue in the next scene... and then the scene after that. As Anjo, Sho Aikawa is emotionless... like the Asian Terminator. There are hints of yakuza hierarchy, but Kuroswawa's penchant for cutting out the most potent bits of information create an air of comedy as we simply follow Anjo and have to believe in his blood thirsty desire. 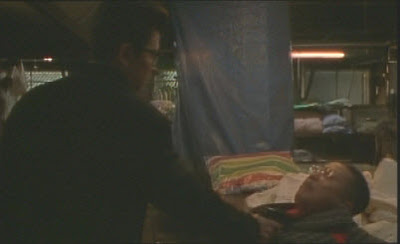 While sharing an affinity with his portentous horror films in editing, sound and calculated camera swivels, "The Revenge" plays far less seriously than those previous Kurosawa efforts. And there are still quiet moments of human interaction between the violence though. In Part 2, Aikawa befriends a young female student upstairs and charges her to mend him a suit, which she places on his door handle outside and is never picked up by Anjo. The tall, lanky yakuza member that Anjo spends most of his time with in Part 2 shares an appreciation of chess with Anjo, and they try and complete one game the entire movie as various interruptions always seem to pop up. "The Revenge Double Feature" does have one motive on its mind for most of its 3 hour running time, but the attention to humanity that creates the monsters in Kurosawa's unique universe is never far behind.
Posted by Joe Baker