There's no doubt that director Joe Wright loves all that's technically dazzling when it comes to camera movements. The much talked about tracking shot in his 2007 film "Atonement" is self indulgent, yet my heart still races when I realize I'm in the midst of a specially arranged tracking shot that dares to visualize certain narrative points in unique and challenging ways. While there's not quite the length of this shot anywhere in his latest film, "Hanna", Wright does showcase several technical moments of brilliance in a film that otherwise feels remote. 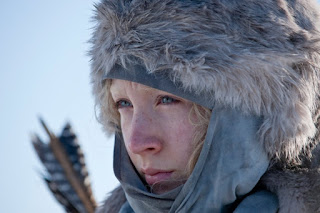 Starring the young Sairose Ronan- who has quickly amassed a few roles that pose her as an energetic new talent on the brink of something great- "Hanna" sets up the premise that she is a fresh-faced killing machine, trained in the wilderness by her ex-CIA father (Eric Bana) and chased relentlessly by government figure head Cate Blanchett. The moment young Hanna is captured and her innate ability to run, survive and shoot weapons becomes imminent, "Hanna" turns into an eye-catching, post-punk fast and furious romp across downright weird locales bracketed against the techno thumpings of The Chemical Brothers. If nothing else, "Hanna" feels like a modern revenge grrl fantasy, filled with innovative cinematography (by the great Alwin Kulcher) and jaw-dropping set pieces.... such as the image of the very evil Cate Blanchett emerging, literally, from a giant wolf's mouth in an abandoned amusement park. Thrown into the mix is Ronan's dough-eyed connection with the outside world and a friendship with a fellow teenager (Jessica Barden) that quietly slows down the middle section of the film into an offbeat coming of age tale. But its not long before director Wright re-emerges with bullets, sadistic German bounty hunters and lots and lots of running. 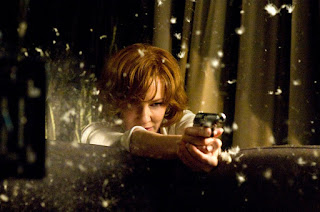 Ultimately, I'm split on "Hanna". One side of me wants to celebrate the uniqueness of the film through Wright's esoteric style of filmmaking... such as the long handheld shot of Eric Bana through a bus station, down an elevator and into an underground parking garage where a quick fight ensues with a half dozen agents wanting to bring him in. There's yet another scene early in the film that explores some of Hanna's background, where a handheld tracking shot slowly follows Blanchett's fatal walk up to a burning car. While I loved every second of the anticipation of what was to come, I could hear the grumbling in front of me of "hurry up already". Clearly, parts of "Hanna" are not for mass consumption... and that alone should be enough to recommend. But there's never really a solid connection established for Hanna as a person. It's all surface, neon lights and, at times, MTV-video style ediitng... all aspects of modern film that don't quite lend themselves to strong character interaction. "Hanna" is a noble effort, but not quite. For me, that's the most frustrating thing about 2011 so far and the number of "almost greats" and "not quites".
Posted by Joe Baker