An Appreciation: Elaine May

There was little room for women in the new brat pack of the 70's. Either marginalized to the independent fringes such as Barbara Loden or encapsulated within international cinema in the likes of Line Wertmuller or Agnes Varda, the machismo-enraged ticket buyers were interested in large, deadly sharks or casting a fresh eye on the mean streets of New York. But there was another director who produced three stunning films in a five year creative burst amongst the boys. Elaine May. Coming to the silver screen by way of Broadway (and with ex-comedy partner/writer Mike Nichols on her roster of good friends), May never quite got the respect she deserves.... in my opinion at least. 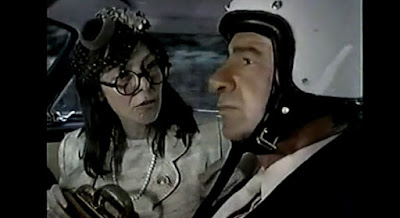 Her initial film, "A New Leaf", which she also wrote, was released in 1971 to good reviews but little box office. Watching it today, not only does it crystallize May's unique ability to write witty (and hilarious) dialogue, but it begins her fascination with the simple interaction between two divergent souls... a theme that will be explored in all her films. Starring Walter Mattheau as a bankrupt New York playboy forced to marry the clumsy and nerdy Henrietta (May in a supporting role) for her money, "A New Leaf" avoids the trappings of its sitcom set-up that many films might have fallen into through its innocent, gleeful and almost Chaplin-esque qualities. Look no further than the awkward meeting of playboy Graham and Henrietta. Comparing it to most comedies of the last 40 years, not only is "A New Leaf" a terrific and tone-perfect debut, but still funny as hell.

In 1972, May directed her second film entitled "The Heartbreak Kid"- which I personally consider her very best. Despite the terminally awful remake by the Farrelly Brothers a few years ago, which fails to capture the supreme awkwardness or humanity of the original, May's film remains an accurate-feeling thermometer of the times. Charles Grodin stars as Lenny Cantrow, newly married to Lila (Jeannie Berlin) and on vacation in Miami for their honeymoon when he meets the much younger and attractive Kelly (a stunning Cybil Shepherd). Growing increasingly addicted to Kelly's beauty Lenny begins to make drastic choices. "The Heartbreak Kid" is a comedy... just a very dark and unsettling one. Inharmonious matrimony and the idea of separating from the stable life established by their 1950's parents, early 70's cinema bore this unrest like a badge of honor. From Cassavetes in "Husbands" to Ingmar Bergman's scathing examination of a marriage on the brink in "Scenes From a Marriage", "The Heartbreak Kid" feels right at home with this malaise, albeit with a smirk and whimper rather than existential guilt. The scene in a seafood restaurant when Lenny tries to announce his feelings about his new found young love goes on for what feels like forever, leaving Lila a crying, miserable mess and the fellow onlookers forced to confront this couple's apocalypse with them. It's a moment alternatively sad and side-splitting funny, with Lenny desperately attempting to talk his way out of it (as he's done most of the movie) and Lila, crying, gasping for air as if she's been gut punched. And in all honesty, May's film does create the alternate life of Lenny and beautiful young Kelly as something more healthy and satisfying. But even then, like her ex-partner's generation-setting masterpiece "The Graduate" 3 years earlier, "The Heartbreak Kid" ends on a resoundingly depressing note for a comedy even after Lenny succeeds in his goal. While "The Heartbreak Kid" does surpass the expectations of a great (if uncomfortable) comedy, it also features some indelible image making, such as the first appearance of Cybil Shepherd, with her face blocking out the sun of a relaxing Lenny on the beach, which in and of itself deserves to be regarded as one of the finest entrances in screen history.

In 1976, May wrote and directed "Mikey and Nicky", a modest drama starring Peter Falk and John Cassavetes. Filmed mostly on location in New York, the film remains May's most potent examination of friendship soured by external forces. Cassavetes plays Nicky, a low rent member of a crime organization holed up for some oblique act he committed against the boss. His best friend, Nicky (Peter Falk) is tasked to murder Mikey. The two men spend a nervous night and morning together as the questions of will he or won't he continue to surface. Played in long takes and full of awkward stammering and the usual Cassavtes-like improv set pieces filled with booze and nervous laughter, "Mikey and Nicky" infuses every moment with bustling New York life and congested street noise. It's certainly May's most visually aggressive film, and one where the subject matter seems to lend confidence, such as a tension-filled scene in a diner where we carefully wait for a payphone to ring. The parlay between Falk and Cassavetes grows stronger as the psychological games mount. Fitting comfortably in neither the crime genre or the buddy movie, "Micky and Nicky" is truly an effort that defies categorization.

Then there was "Ishtar". Released in 1987 at a staggering budget for a comedy, amidst rumors of director and star discontent and unanimously negative reviews, it's a film that basically killed May's career behind the camera. Starring Warren Beatty and Dustin Hoffman as lounge singers who embark on a circuit tour in Morocco and end up being mistaken for CIA operatives, the film's out of proportion legend far proceeds its actual merit. All of that to say it's not a terrible film, consistently funny and completely indicative of the 1980's buddy comedies of Akroyd, Chase and Murphy. 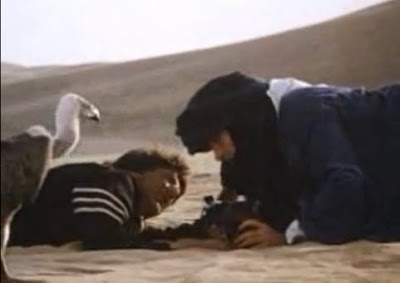 One of the biggest laughs I can remember having at the film is its typical Elaine May conversation that skewers both politics and the almighty dollar. While being 'recruited' in Morocco by CIA officer Charles Grodin, he lures Hoffman with the line of... "we'll pay you 150 dollars a week"... Hoffman- "really?" Grodin- "sure, I mean you can't really put a price on democracy". Then there's the blind camel scene that plays like a another reference to Chaplin... and Hoffman's impersonation of an Arabic auctioneer in the desert... jokes and scenes that feel like rocket science compared to the gross out humor and juvenile antics of current comedies. "Ishtar" certainly doesn't deserve the banishment it's refined in certain circles today, and its a supreme shame that May has never rebounded from the personal and bureaucratic offenses stirred up by the film. She's much too talented to be sitting in the wings. Now, if we could only get a few of these films available on DVD, maybe the retrospective appreciation could begin.
Posted by Joe Baker

God I'm lazy - didn't mean to let more than a week go by without commenting... Not that I have anything profound to say, just that I agree, whole heartedly - it's a crime that she's making films anymore.